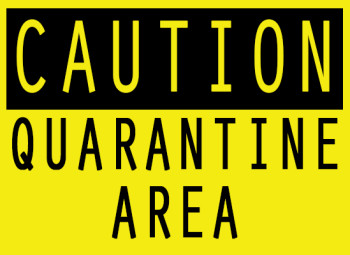 The site’s founder and reporter Krystal Knapp found out from her readers that Snyderman was in a car outside a restaurant and a passenger went into the restaurant to pick up food, a violation of the voluntary quarantine, the Washington Post’s Erik Wemple reported.

Snyderman apologized for breaking the voluntary quarantine, set into place after one of her cameramen was diagnosed with Ebola.

Because of her untrustworthy and potentially dangerous breach, the New Jersey Department of Health forced the crew into quarantine. In a statement quoted by CNN, the department said:

“Unfortunately, the NBC crew violated this agreement and so the Department of Health Friday evening issued a mandatory quarantine order to ensure that the crew will remain confined until October 22.”

The department added that “the NBC crew remains symptom-free, so there is no reason for concern of exposure to the community.”

Snyderman’s cameraman Ashoka Mukpo contracted Ebola when the NBC crew were in Liberia, the New York Daily News reported.  Mukpo, who was freelancing with NBC, is being treated in Nebraska.

At first, NBC News declined to comment on the claims made by Planet Princeton, instead saying there were “privacy concerns” and that Snyderman’s crew “agreed to follow guidelines set by local health authorities.”

However, Snyderman issued a statement to NBC News yesterday confirming that the group, which had been under voluntary quarantine, was now under mandatory quarantine because “members of our group violated those guidelines.”

“While under voluntary quarantine guidelines, which called for our team to avoid public contact for 21 days, members of our group violated those guidelines and understand that our quarantine is now mandatory until 21 days have passed. We remain healthy and our temperatures are normal. As a health professional I know that we have no symptoms and pose no risk to the public, but I am deeply sorry for the concerns this episode caused. We are thrilled that Ashoka is getting better and our thoughts continue to be with the thousands affected by Ebola whose stories we all went to cover.”

The Post’s Wemple criticized the statement for failing to issue a “full-on apology for misconduct” and for the “classic media-establishment arrogance” in suggesting that Snyderman could better decide how to handle the possibility of an Ebola contraction. However, he did say it was good for NBC News to tell viewers about the “transgression.”

NBC’s Matt Lauer told TMZ that “she knows she made a mistake.”