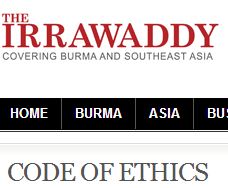 The Press Council’s Information and Public Relations Committee coordinator, Thiha Saw, is quoted as saying that “We welcome suggestions from journalists on this draft, as we want to have all-inclusive views. Any good suggestions will be included in the final draft.”

Irrawaddy as its own set of Journalism Guidelines for Staff Writers, published on its website.

iMediaEthics wrote in August about criticism of the new press council. Check out all of our stories on Burmese media ethics.