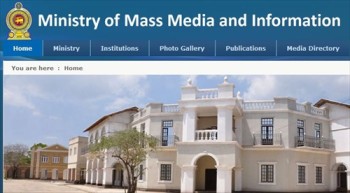 Sri Lanka has a new “code of ethics for newscasting websites,” Sri Lankan news site the Daily News reported. It was created by Sri Lankan governmental body the Ministry of Mass Media and Information.

If readers complain and an editor or journalist doesn’t “apologize or regret an error,” the journalist “must be prepared to offer the aggrieved party a fresh opportunity to reply,” according to the Daily News.

Journalists are also barred from linking to sites that the government has banned, according to the Daily News. As we have written, Sri Lanka’s Ministry of Mass Media and Information is creating a registry of all Sri Lankan news sites. “Several websites” were blocked by the government in 2011, and the U.S. embassy even weighed in with a November statement calling for the government to un-block “legitimate media websites.”

Lanka Business Today reported Jan. 16 that Sri Lanka has given “nearly 60 news websites” licenses that will last one year.

In the past month, journalists in Bahrain, Haiti and Indonesia have seen new ethics codes, as we have written. The Bahrain Journalists’ Association called for the public’s input on its draft code of ethics in early January.  In December, Haitian journalists announced their first code of ethics. Also in December, Indonesia’s press cuoncil announced it finished its ethics policy for online media, which will be published next week.

We have written to Sri Lanka’s Ministry of Mass Media and Information for more information and will update with any response.