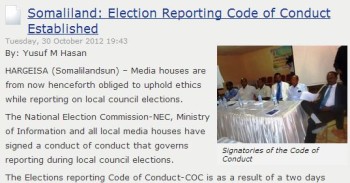 The code advises against sensationalism, invasion of privacy, “hidden cameras,” and bias.  Further, the code calls for journalists to “protect” their anonymous sources, and for “media houses to partake in voter education among others.”

According to the Somaliland Sun, the code was created during a 2-day “Journalism Ethics training workshop” and was agreed to by “The National Election Commission-NEC, Ministry of Information and all local media houses.”

The Sun identifies itself as an “independent, unbiased and reliable news source from the heart of Somaliland and the Horn of Africa.”

Oregon newspaper didn't include any women in yearly perspectives feature
Coronavirus errors: More news media corrections include how to disinfect