New take on recycling? UK Paper takes year-old quote, tweaks it to make it current, and publishes as new quote 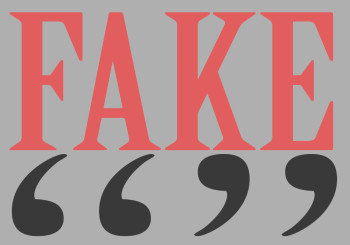 A woman named Helen Gillespie opened her local weekly newspaper, the Macclesfield Express, and read a quote attributed to her. Problem is, she didn’t give the newspaper any quote.

Gillespie contacted the press regulator IPSO to complain about the quote she did not give and the Express, which is owned by Trinity Mirror, offered an interesting explanation. It turned out the newspaper re-used an old quote of hers, updated it to make it current and apparently didn’t think that was a problem.

“The article caused quite a lot of distress to myself as I was unaware of it for several months, and my initial written complaints were simply dismissed by the Macclesfied Express,” Gillespie told iMediaEthics through a Facebook message. “I pursued it with the IPSO purely on principle, as there had been no rush to publish the article (they printed it in November about an event taking place on 18th December), and it was the laziness and arrogance of the reporter that astounded me.”

Gillespie raised an important point, commenting: “I was concerned if they take the attitude this is acceptable on a small story, they would also do the same to someone whose story is bigger, and perhaps more distressing.” Gillespie noted it took three months to resolve the matter.

The Macclesfield Express explained to IPSO that Gillespie had given a similar quote the year before to the paper about the same event and since it was a positive quote about a positive story, the paper just re-used it. But, the Express didn’t just re-publish a year-old quote; the newspaper tweaked the quote to make it current.  iMediaEthics has written to the Express to ask if this is a standard practice and why they didn’t just contact Gillespie for a new quote. 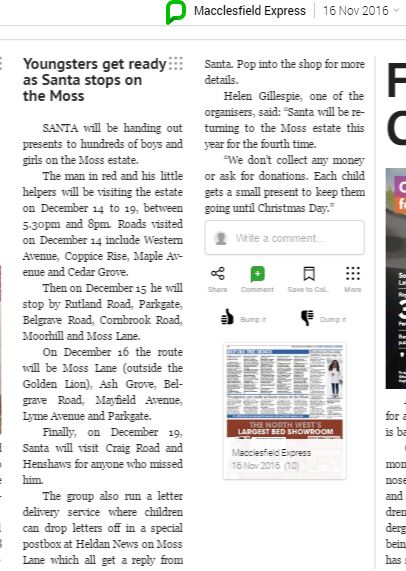 Via Press Reader, the 2015 article for which GIllespie did actually give a quote.

In 2015, the newspaper did actually get a real quote from Gillespie. She said: “Santa will be returning to the Moss estate this year for the third time. We don’t collect any money or ask for donations. Each child gets a small present to keep them going until Christmas Day.”

One  year later, in the 2016 story, the same Gillespie quote was used, with one minor change. iMediaEthics has underlined what was changed: “Santa will be returning to the Moss estate this year for the fourth time. We don’t collect any money or ask for donations. Each child gets a small present to keep them going until Christmas Day.”

The Macclesfield Express’s Nov. 16, 2016 story was headlined “Youngsters get ready as Santa stops on the Moss.”

In order to resolve the complaint, the newspaper eventually offered to apologize to Gillespie and publish a clarification. That clarification read:

“The quotation from Helen Gillespie published on 16 November 2016 in an article headlined: “Youngsters get ready as Santa stops on the Moss” was in fact an updated version of a quotation given to the newspaper in 2015.”

Because the apology and clarification satisfied Gillespie, the complaint was resolved and IPSO didn’t rule on the matter.

New take on recycling? UK Paper takes year-old quote, tweaks it to make it current, and publishes as new quote