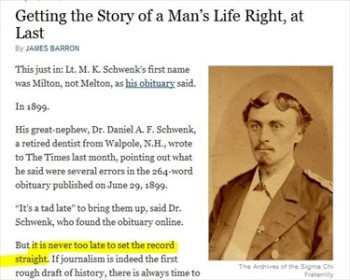 The New York Times explained in a post on its “City Room” blog that it has corrected a 112-year-old obituary for Lt. Milton K. Schwenk in its archives.

Schwenk’s great-nephew solicited the corrections for errors such as the misspelling of his great-uncle’s first name and listing Schwenk’s hometown as being in Georgia instead of Pennsylvania.  According to the Times, in its fact checking of the 1899 obituary, the newspaper also found other errors in Times’ reporting on the Schwenk family.

The Times added that the New York Tribune’s obituary for Schwenk was “almost identical” and had “the same mistakes” so the errors may have come from handwriting transcription.

The Times explained its corrections:

“But it is never too late to set the record straight. If journalism is indeed the first rough draft of history, there is always time to revise, polish and perfect, even if pinning down the details about Lieutenant Schwenk after so many years turned out to be less than straightforward.”