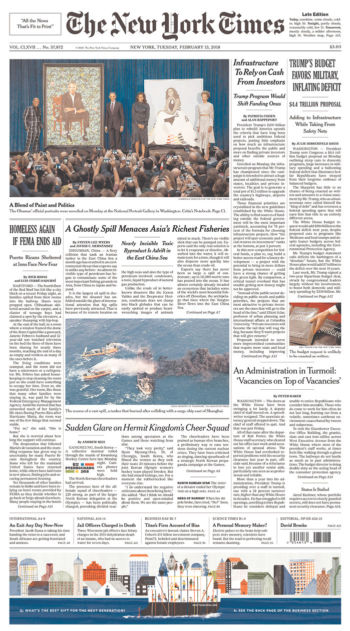 The New York Times cut ties with its new editorial writer Quinn Norton after her previous controversial tweets using racial and anti-gay slurs surfaced. The decision came hours after the Times announced Norton’s hiring as its editorial board’s “lead opinion writer on the power, culture and consequences of technology.”

Norton had tweeted in 2013 calling someone a “fag” and used the n-word in a tweet. One tweet from July 2013 responded to someone saying, “you are laying waste to your own f**king ideals, you sh*t eating hypersensitive little crybaby fag.” The Huffington Post, which posted screenshots of her tweets, noted, “It’s unclear whether the Times’ editorial board knew about the tweets before hiring Norton. Many of the tweets under immediate scrutiny are from 2014 or earlier.”

In a statement cited in the Times‘ own story about Norton’s hiring and dismissal, the Times’s editorial page editor James Bennet said, “Despite our review of Quinn Norton’s work and our conversations with her previous employers, this was new information to us. Based on it, we’ve decided to go our separate ways.” iMediaEthics wrote to the Times to ask if the decision to cut ties was made solely on her tweets and if the newspaper typically reviews public social media postings before making new hires; the paper’s spokesperson provided the statement from Bennet.

Just after her hiring was announced and hours before she lost her gig, Norton posted on the site Patreon announcing her new gig at the Times. She wrote: “I haven’t tried to make myself look more professionally acceptable, more conventional, or any of that, for the benefit of my new employer. I plan to just be me, and bring my ideas to the table. I hope those ideas help.  And if that doesn’t work out, no harm no foul.”

After her tweets got attention, Norton tweeted numerous times in her defense, indiciating her tweets weren’t taken in context. She said she didn’t “support weev,” and that “I believe white folks should engage with the racists in their life.” She said she’s “been a queer activist since 1992,” arguing her use of “fag” and “faggot” was because of the community she was trying to “speak to” and commented other tweets were “not my best tweet.”

Norton defended her tweet calling the New York Times‘ 2014 article about Michael Brown, who was killed in Ferguson, Missouri, “being a terrible, racist call” that “should never have run like that.”

“As I said so many times to the @nytimes, no harm no foul,” she tweeted. “I’m sorry I can’t do the work I wanted to do with them. I wish there had been a way, but ultimately, they need to feel safe with how the net will react to their opinion writers.”

Statement from NYT editorial page editor James Bennet, who says the paper was surprised to learn of Quinn Norton’s previous tweets and that the two have gone their separate ways pic.twitter.com/tw9RN3JhmY

As I said so many times to the @nytimes, no harm no foul. I'm sorry I can't do the work I wanted to do with them. I wish there had been a way, but ultimately, they need to feel safe with how the net will react to their opinion writers.

I stand by my angry tweet referencing the 2014 NYtimes "no angel" article about Michael Brown being a terrible, racist call. That should have never run like that.

One more thing, about me, and anons, and so on. One of the tweets coming up was a conversation I specifically talked about in an article about context collapse: https://t.co/nfJD9oqRft And context collapse is what happened here tonight.

I used a variation of offensive language to talk about questions of tone. I really wasn't comfortable using the word directly, so I didn't. I was trying to make a point, but something else would have made that point better. So, also not my best tweet.

I retweeted @JPBarlow using offensive language in a sarcastic tweet that was meant to slap back at racists after Obama's first election. Eh, not my best retweet, even if the intentions, both mine and Barlow's, were in the right place.

I've been a queer activist since 1992. But when I speak to communities, I used their language to do it. I talked about the Anonymous usage of "fag" and "faggot" here: https://t.co/1hdDvcrBB6

For those of you honestly concerned. I don't support weev, that's not given in how I define friendship. I believe white folks should engage with the racists in their life: https://t.co/IQcN3yz58x and I believe all people are redeemable, and "all people" is all people.