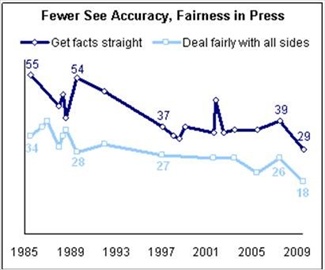 The New York Times reported this week that politicians' dislike of the media has started to "boil over." Pictured above is "Pew's 2009 press accuracy rating survey" that found fewer citizens, in general, "see accuracy, fairness in press." (Credit: Pew)

Politicians have let their dislike of the media “boil over” this year, according to an Oct. 31 New York Times report.

The Times highlighted several high-profile incidents of the media and politicians butting heads, including the recent detaining of an Alaskan reporter and Sarah Palin’s labeling the media “the lame stream media.”

Many candidates are using social media networks like Facebook and Twitter,  their personal websites and specific media outlets, to interact with the public, The Times noted.  However, “some politicians have taken their distaste and mistrust of journalists a step further, opening a direct assault on the news media as an institution.”  (For example, see here PBS MediaShift’s Nov. 2009 story reporting how politicians are using social media to “deliver an uncensored, unfiltered — and unchecked — message.”

Nicolle Wallace, who is “a former communications strategist for George W. Bush and John McCain” told the Times, “The relationship is probably at a low point between politicians and the media, particularly on the right.” Wallace noted Sarah Palin “is at war with the media.”

As evidence of their overall point, The New York Times also cited Pew Research Center’s 2009 poll on public attitudes toward the media.

“Whether it’s the press, whether it’s government, there has been this lowering of credibility in a lot of institutions in America,” Pew associate director Michael Dimock is quoted as saying. “You name it. It’s hard to find a group or institution that isn’t being viewed more skeptically these days.”

The 2009 press accuracy rating survey reported why people said they are critical of the media.  The following reasons were selected: