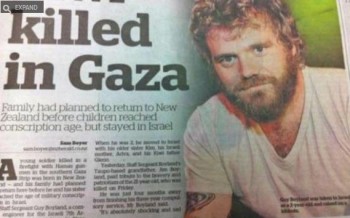 Boyland was killed in Gaza and a report on his death was published on the front page of the newspaper. But, the Herald grabbed a photo from Boyland’s Facebook page assuming the photo was of Boyland, when it was, in fact, of Dunn, the Los Angeles Times reported. Dunn died in 2011 in a car crash.

The Herald published an apology on its website. It reads:

“An incorrect photo was used to illustrate this article in the print edition of today’s Herald. The photo used on the front page was of late actor Ryan Dunn. The Herald apologises to the Boyland family and to our readers for the error.”

In addition to that apology, the Herald‘s editor Shayne Currie published a lengthy statement on the newspaper’s website apologizing. Currie accepted responsibility for the photo error. He added that Boyland’s family has “been remarkably forgiving” of the newspaper’s mistake.

“The New Zealand Herald apologises unreservedly to the family and friends of Guy Boyland following the incorrect use of two images in today’s paper and on the New Zealand Herald website,” Currie wrote. “As Editor I take responsibility for the errors that should never have occurred.”

He confirmed that the newspaper got the photo from Boyland’s Facebook page, where Boyland had posted a picture of Dunn.

“I would like to reiterate how seriously we are taking this error and apologise again,” Currie commented. “I would also like to apologise to our readers – the public trust us to get it right, and we must make sure that this does not happen again.”

Our apologies to Guy Boyland’s family for the wrong photo on this morning’s lead story.

iMediaEthics has written to the Herald’s editor for further comment.