News of the World's Last Edition Today, Was there Phone Hacking in Scotland?

News of the World’s Last Edition Today, Was there Phone Hacking in Scotland? 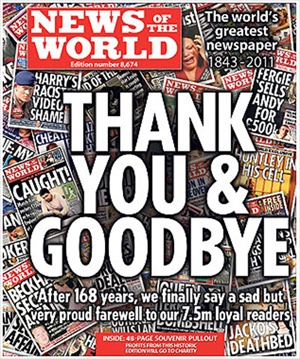 See above an image of the last edition of News of the World. (Credit: Charles Apple)

Today was the last edition of Rupert Murdoch’s News of the World. The newspaper’s closure was announced late last week as more and more allegations of phone hacking emerged.  (Read all iMediaEthics’ stories on the phone hacking scandal here.)

News of the World’s last edition featured an editorial that both praised the newspaper’s work and apologized  for the phone hacking, which the newspaper called “appalling wrong-doing” without justification.

The newspaper statement also countered calls to end the Press Complaints Commission.  According to the statement, “we do not agree that the Press Complaints Commission should be disbanded. Self-regulation does work. But the current make-up of the PCC doesn’t work. It needs more powers and more resources. We do not need government legislation.  That would be a disaster for our democracy and for a free Press.”

The Guardian’s Roy Greenslade criticized the final editorial for sugar-coating the wide reaches of the phone hacking scandal and for boasting “high standards.”  Greenslade commented “Without wishing to dance on a dead newspaper’s grave, especially while the body is still warm, it cannot be allowed to get away with perpetuating yet more myths amid the cheap sentimentality of its farewell.”

Greenslade noted that while News International has claimed hacking took place for “a few years up to 2006” by “some” of its staff, the newspaper has been ordered to make huge payouts in the past few years over invasion of privacy and defamation lawsuits. Adding that not all of News of the World staff has violated ethical guidelines, Greenslade commented:

“It’s a bit rich to claim integrity while working for a paper that has engaged in the dark arts – entrapment, subterfuge, covert filming, the use of agents provocateur and phone hacking – for the best part of 20 years.”

Visual journalist Charles Apple posted a photo of the front cover of the newspaper.  Sky News reported that News of the World printed twice as many newspapers as usual today — 5 million.

For example, the UK Sun, published a front-page story about the closing despite having made “little mention of the phone-hacking scandal” previously. The New York Post “buried” the story with a short paragraph in the business section.

Reuters cited Columbia University’s academic affairs dean, Bill Grueskin, as explaining the low coverage as “no great surprise.”  “The Post is not known for its aggressive coverage of News Corp.” Grueskin stated.

NYU professor Victor Pickard added that media outlets often “do a poor job” in rewporting bad news about their own companies.

The hacking scandal may “thwart” Rupert Murdoch’s attempt to buy controlling shares in BSkyB, The Guardian reported. News Corp. wants ” to buy the 61% of the satellite broadcaster that it does not already own. Before the phone-hacking scandal erupted again last week, the deal had looked on course to be approved by Hunt within weeks.”

According to The Telegraph, the BSkyB purchase would cost Murdoch’s company about £12 billion.

Labour leader Ed Miliband, who has publicly criticized the Press Complaints Commission’s lack of involvement and action in the phone hacking scandal, is trying to get “cross-party support for a motion in parliament” to stall Murdoch’s “takeover” of BSkyB until after the News of the World investigation is over, The Guardian reported.

A member of Parliament, Chris Bryant, has commented that “We have let one man have far too great a sway over our national life,” Sky News reported.  “No other country would allow one man to garner four national newspapers, the second-largest broadcaster, a monopoly on sports rights and first-view movies.  America, the home of the aggressive entrepreneur, doesn’t allow it. We shouldn’t.”

The Associated Press noted that Murdoch’s 1969 purchase of News of the World was “his first foothold in Britain’s media,” to be followed by the purchase of “several other titles, gaining almost unparalleled influence in British politics.”

Brooks to Be Questioned

According to The Telegraph, Brooks has reportedly offered to resign twice, but News Corp’s Rupert Murdoch is still defending her.

Christian Science Monitor reported that the phone hacking scandal has extended outside of Britain. According to CSM, the police are investigating claims that the News of the World hacked the voicemail of a Scottish politician, Tommy Sheridan.

In 2006, Sheridan filed a lawsuit against the newspaper over its story claiming “he had engaged in extra-marital affairs.”  While he was “awarded  £200,000 ($321,000) in damages,” he was convicted in 2010 on perjury charges.” partially based on evidence that was presented in court by NotW.”  In December 2010, Sheridan called for News of the World to be investigated.

News of the World’s Last Edition Today, Was there Phone Hacking in Scotland?