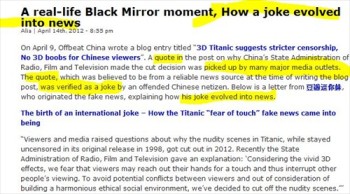 A satire post on Chinese social media prompted fake news stories about Chinese censors, who took out “the scene of Jack drawing a nude portrait of Rose” in the movie Titanic, China Daily reported.

As China Daily and Global Times explained, a post by someone identified as “Doubandounimei” claimed that Chinese censors edited out nude scenes because moviegoers might  “attempt to reach out and touch the screen during the scene and hit the heads of viewers sitting in front of them.”

“Doubandounimei’s” post on “Sina Weibo” (identified as “China’s Twitter”) included the label “fake news,” but when the claims were re-posted, the disclosure was dropped.  The claim was repeated by Titanic director James Cameron on Comedy Central’s The Colbert Report, according to China Daily, and also news media outlets.

The Daily Mail, for example, reported the fake quote writing :

“An official at the State Administration of Radio, Film and Television said: ‘Considering the vivid 3D effects, we fear that viewers may reach out their hands for a touch and thus interrupt other people’s viewing.  To avoid potential conflicts between viewers and out of consideration of building a harmonious ethical social environment, we’ve decided to cut off the nudity scenes.'”

According to China Daily, “Since major Western media, such as Hollywood Reporter and the Daily Mail, spread the fake news without checking sources, the finger of blame should not be pointed at Cameron. And since SARFT did not itself openly respond to the fake news, it did not help itself. Its silence, in fact, made the situation worse.”

China Daily explained that the scenes were actually edited out because “China has no rating system, so nude scenes are not allowed on the big screen.”

According to a separate post by China Daily, the originator of the satire is the person who “finally crushed the fake SARFT statement almost one week after the release of his original post.” Further, according to China Daily, the unnamed student “intended it as a joke.”

Gawker, which noted that EOnline, Hollywood Reporter and MSN also reported the fake quotes, wrote that “the rumor probably originated with this blog post, which fails to mention the joke aspect.”

In that post, Offbeat China, a website identified as “online buzz, fun stories and insights from the Chinese internet” the blog post has been updated with an apology for “not having done more research and failing to point out that it was unverified information.”  According to Offbeat China, the SARFT quote was posted by others sites like “Tianya, Xinmin and a number of other more reliable news media who subsequently deleted their posts”

Offbeat China also published the hoax originator’s explanatory post on the hoax and added in “how Offbeat China “contributed” to the spreading of the fake news.”   See here the explanation post.

In the originator’s translated explanation, he wrote  that the “idea…came from” The Onion and that even though he tagged it as “fake news” when his hoax was shared, it “the #fakenews# tag was lost.”

The Hollywood Reporter’s post has since been updated to read:

“Adding to the Titanic frenzy, many prominent Western media outlets (including THR for a brief period) were momentarily duped by a satirical joke that swept through Chinese micro-blogs, attributing the following explanation for the cuts to a SARFT official:

‘Considering the vivid 3D effects, we fear that viewers may reach out their hands for a touch and thus interrupt other people’s viewing. To avoid potential conflicts between viewers and out of consideration of building a harmonious ethical social environment, we’ve decided to cut off the nudity scenes.’

“In fact, SARFT has not released any official comment about the censorship.”

The Huffington Post posted a correction on its April 11 report on the censorship that reads:

“Correction Notice: The original version of this article stated that the comment from the fictional SARFT official above was an actual official response. It wasn’t. There has been no official response as to why the nude scene was cut.”

E! Online, MSNBC, Entertainment Weekly and the Daily Mail all still have the phony quote posted.

We have written to the Daily Mail, Entertainment Weekly, MSNBC, and E! Online asking if they plan to correct and will update with any response.

Bloomberg wrote about the hoax noting that it was “near perfect Chinese satire, especially in its precise lampooning of official China’s tendency to frame every action as enhancing social harmony.”

We wrote in 2010 about a similar story where involving satire and 3-D technology. In that case, Brazilian satire website Sensacionalista  (an Onion-like site) posted a story claiming an American woman said she was impregnated from watching 3-D pornography. The story was picked up by the Gizmodo blog and others as a real story, only to be revealed as a satire fake story.

Earlier this month, we wrote when MSNBC issued a correction for airing satire as news. In that case, MSNBC pulled from a Huffington Post satire article titled “Microsoft, Apple United to Demand that the National Organization for Marriage Boycott Them” only to learn later that the story wasn’t real news.