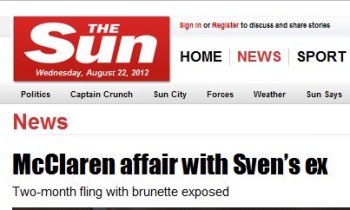 The UK high court rejected an application for an injunction against the News Corp-owned UK Sun, the Guardian reported.

Steve McClaren wanted to “prevent the publication” of the Sun’s story “Soccer exclusive: McClaren affair with Sven’s ex,” but the judge, Justice Lindblom, determined that “the public interest in the story being published outweighed McClaren’s right to privacy.”

The Sun’s article claimed that McClaren “is cheating on his wife AGAIN — with the ex-lover of predecessor Sven Goran Eriksson.”  The report, tagged “Exclusive,” quotes the woman in question, details their alleged affair, and reported that McClaren “admitted to the Sun in April 2006″ a previous “fling.” McClaren is a “former England [football team] manager” and currently the manager of team FC Twente.

As the Guardian explained, the Sun claimed the managing job “is the most high-profile public position in the country.” Press Gazette added that the Sun claimed McClaren “presented the image of a happily married family man while privately having an affair.”

According to the Guardian, McClaren’s injunction attempt was at the “11th hour” and the newspaper “withheld the story from early editions.”

“The fact that he had a previous affair and had talked about it definitely had some bearing on it, and also that he appeared with his wife by his side when he took the England manager’s job and also when he resigned.

“The judge was very clear that he was a public figure and that when he was England manager he was holding a high-profile job.”

Dinsmore added to the Guardian that the ruling was “an important victory.”

Check out all our stories on injunctions.

We’ve written to News International for comment and will update with any response.