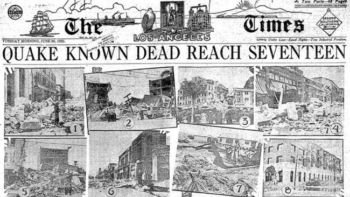 When the robots take over, journalism may be the first casualty. Despite their immense computational power, news robots are fully capable of making bad news errors.

Exhibit A is the Los Angeles Times‘ news robot, which reported and tweeted a 6.8 strength earthquake that happened in 1925 as  breaking news in 2017. The Times‘ algorithm, Quakebot, wrote the story after the U.S. Geological Survey (USGS) sent out an alert about the earthquake allegedly 10 miles off Santa Barbara. Quakebot “automatically writes stories about earthquakes based on USGS alerts,” the Times explained in a tweet.

According to Gizmodo, “The Los Angeles Times has employed Quakebot since 2014 and has reported on hundreds of earthquakes, big and small, over the years. But this is the first known major screw up since it was first put online.” Slate wrote in March 2014 about the Times‘ journalist and programmer Ken Schwencke’s creation of Quakebot. iMediaEthics has written to Schwencke for comment, but he e-mailed that he now works for ProPublica and is no longer involved in the Times program.

“Whenever an alert comes in from the U.S. Geological Survey about an earthquake above a certain size threshold, Quakebot is programmed to extract the relevant data from the USGS report and plug it into a pre-written template,” Slate reported. “The story goes into the LAT’s content management system, where it awaits review and publication by a human editor.”

The Times told iMediaEthics by e-mail it has used the Quakebot for “about 5 years.” The newspaper’s spokesperson stated, “An editor reviews each Quakebot before it is published. Quakebot posts are single-source, relying on information provided by the US Geological Survey.”

The spokesperson added, “The Los Angeles Times acknowledged that the initial report was made in error and issued a correction.”

The USGS alert was an accident, though, caused by a software error, the Times‘ story now explains.  The California Institute of Technology’s researchers had tried to update details about a real June 29, 1925 earthquake near Santa Barbara, but the updates in the USGS’s earthquake database were made, it “accidentally triggered an email [alert] from the USGS email server,” the Washington Post reported.

Bob Degroot from the ShakeAlert Earthquake Early Warning Program and USGS, told iMediaEthics by phone, “It was a learning experience for us. There is a fix that is in place now that will keep this from happening.”

Degroot added that he has “never seen anything like this before” but that the USGS has added steps, including a “human element,” to make sure that in the future the auto alerts won’t run without a human confirming.

According to DeGroot, the inaccurate message was deleted quickly and  a correction was posted about an hour later.

“The USGS Web pages were updated correctly,” according to the Los Angeles Times. “But in the USGS’ email notification system, the year got changed from 1925 to 2025, which caused an email to be sent from the server that typically distributes alerts of new earthquakes.”

The Times later posted an update to its story and deleted the tweet about the earthquake.

Please note: We just deleted an automated tweet saying there was a 6.8 earthquake in Isla Vista. That earthquake happened in 1925.

We have an algorithm (Quakebot) that automatically writes stories about earthquakes based on USGS alerts. The USGS alert was incorrect.

The Times has also posted a host of updates to its original article acknowledging that the story was wrong and how the error happened. The updates state:

11:55 a.m.: This article was updated with additional details about the software bug and how, if there had been a quake, the Los Angeles area would have felt shaking before the the USGS notifications arrived in email boxes.

10:10 a.m., June 22: This article was updated with more information about the origin of the error, involving USGS email notification.

7:35 p.m.: This article was updated with information on what showed up on the USGS website.

5:55 p.m.: This article was updated with a statement from the USGS.

4:55 p.m.: This article was updated with information that the report was erroneous.”