No ‘Pay for Play’ at NPR for Iran Nuclear Deal Coverage, Ombuds Says 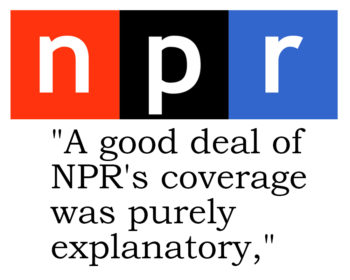 A group in favor of the Iran nuclear deal, The Ploughshares Fund, gave $100,000 to NPR “to help it report on the pact and related issues,” the Associated Press reported. But there was no real conflict, just a perceived conflict of interest, NPR ombudsman Elizabeth Jensen found.

The funding raised flags because the Ploughshares Fund is partisan and focused on a specific issue, and the money went straight to reporting.  “The Ploughshares grant to NPR supported ‘national security reporting that emphasizes the themes of U.S. nuclear weapons policy and budgets, Iran’s nuclear program, international nuclear security topics and U.S. policy toward nuclear security,’ according to Ploughshares’ 2015 annual report, recently published online,” the AP reported.

“What critics are legitimately asking is whether there was a break in the firewall, since there is certainly an appearance that NPR opened itself up to be used as a propaganda organ of the administration via its reporting grant from Ploughshares,” Jensen explained. Jensen said there wasn’t and there was “no pay for play.”

The perception of the conflict “was inevitable,” she wrote, because necessary disclosures, like saying when guests were affiliated with or paid by the fund, weren’t always made.

In examining the possible conflict, Jensen said her office analyzed NPR’s coverage. “A good deal of NPR’s coverage was purely explanatory,” she found, noting her team reviewed “254 on-air newsmagazine stories from Jan. 1, 2015, to the present that we categorized as directly related to the Iran deal.”

Her office rated the stories as neutral, positive or negative on the Iran deal. Her breakdown:

Jensen also analyzed who was interviewed, finding there were two interviews with President Barack Obama and two with Iran nuclear deal opponent Israeli Prime Minister Benjamin Netanyahu. Jensen responded to Rep. Mike Pompeo (R-KS), a member of Congress who complained NPR wouldn’t interview him, finding the only reason his interview was canceled was because they had “too many other interviews” on the books. That said, she pointed out NPR did interview other Congressional opponents to the deal like Sen. Charles Schumer (D-NY)

One area where there was a gap in standards: Guests are supposed to be asked to disclose any conflicts, but at the same time, newsroom staff doesn’t usually know the ins and outs of funding.

Jensen reported that NPR’s spokeswoman Isabel Lara said NPR first received a grant in 1984, and began receiving regular grants in 2005, with at least $700,000 in grants in the past ten years. “The process starts with NPR, where the newsroom decides what it wants to cover and the development side of the organization seeks financial support for that, not the other way around,” Jensen explained.

iMediaEthics has written to the Ploughshares Fund to ask if it has any response to Jensen’s article or the questions around its funding to media outlets.

No ‘Pay for Play’ at NPR for Iran Nuclear Deal Coverage, Ombuds Says