No Photos in Bild Today after Syrian Toddler Picture - iMediaEthics

No Photos in Bild Today after Syrian Toddler Picture 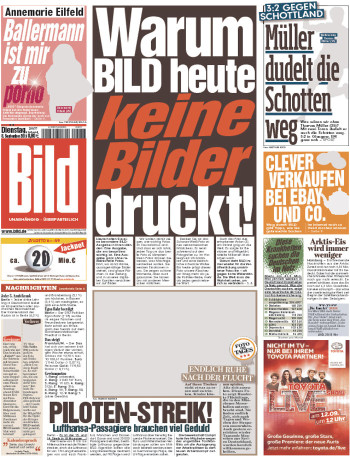 Bild didn’t use any pictures in today’s issue.

The move was to emphasize the “power of photography” in light of photos of the dead Syrian toddler on the beach identified as both Alan and Aylan Kurdi, the Guardian reported.

“This edition of BILD without images is a bow to the power of the visual, the power of photography itself. Without pictures the world would be more ignorant, the needy even more invisible, more lost. Many crimes would simply be forgotten without a visual reminders, no atonement, no penance, no apologies to prevent learning and memory. Photographs are the screams of the world.”

Reichelt compared the photo of Kurdi to the iconic image of the Vietnam Napalm girl. He also rejected calls for graphic images to be pixelated or avoided.

“Time and again, indeed currently we are hearing demands not to show images at all,” Reichelt wrote. “We are asked to pixel them since human suffering is documented in too drastic a manner and people’s dignity is taken away.”

But Reichelt said: “This argument ignores the most important part. It is not the photo depicting the undignified situation. It is the war! The ignorance of politics, our cowardice to step in. The photo documents the world and this world is not hidden behind pixels! We have no right to take the easy route, to look away when injustice happens. We must force ourselves to look. The pain we feel when viewing the pictures is nothing compared to the pain of the depicted. We have no right to say: I choose to look away because my pain is the same as theirs. It is not!”

No Photos in Bild Today after Syrian Toddler Picture