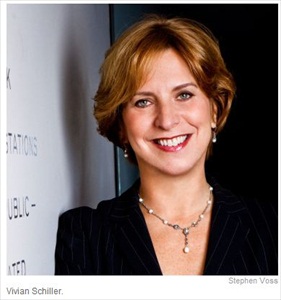 “Ron Schiller has informed us that, in light of the controversy surrounding his recent statements, he does not feel that it’s in the best interests of the Aspen Institute for him to come work here.”

NPR reported Schiller’s resignation, stating that she resigned “after NPR’s board of directors decided that she could no longer effectively lead the organization.”

Dave Edwards, chairman of NPR’s board of directors, issued a statement  March 9 to “staff and member stations” yesterday. In the statement, Edwards announced her immediate resignation and that “Joyce Slocum, SVP of Legal Affairs and General Counsel, has been appointed to the position of Interim CEO.”

The board of directors “will immediately establish an Executive Transition Committee that will develop a timeframe and process for the recruitment and selection of new leadership.”

In an update, NPR reported that Edwards added:

Edwards stated that Schiller “offered to step aside if that was the board’s will,” he said, “and the board ultimately decided that was in the best interest of the organization.”

Regarding Ron Schiller’s comments, Vivian Schiller commented  to the New York Times that she “obviously had no prior knowledge and nothing to do with them, and disavowed them as soon as I learned of them all. But I’m the C.E.O., and the buck stops here.”

She went on to say:

“I’m hopeful that my departure from NPR will have the intended effect of easing the defunding pressure on public broadcasting.”

Former NPR news analyst Juan Williams was fired in October after he commented on Fox News, where he was a commentator, that he gets “worried” and “nervous” when he sees “people who are in Muslim garb” on an airplane.

In January, NPR announced the results of its investigation into Williams’ firing and faulted Schiller and former news senior vice president, Ellen Weiss.  Weiss resigned and Schiller didn’t get a 2010 bonus because of the board’s “concern over her role in the termination process.”

However, at the time of the announcement, the board reportedly claimed it didn’t “recommend” or “have a say” in her resignation.  The board’s chairman, David Edwards, told Poynter the board “can only make personnel decisions concerning the CEO.”

Ron Schiller bumped up his departure from NPR after James O’Keefe released a “secretly recorded” video of Schiller labeling Tea Party supporters “racist” and claiming that NPR “would be better in the long run without federal funding.”  Schiller was NPR’s head of fundraising and has apologized for his comments.

O’Keefe reportedly explained that he “got the idea for the NPR video sting after analyst Juan Williams was fired from the news organization for saying he gets ‘nervous’ when he sees people dressed ‘in Muslim garb’ on airplanes.'”

Some of the comments Schiller made include:

According to NPR, “Schiller is also heard laughing when one of the men jokes that NPR should be known as ‘National Palestinian Radio.'”

NPR addressed the video in a statement:  “The fraudulent organization represented in this video repeatedly pressed us to accept a $5 million check, with no strings attached, which we repeatedly refused to accept. We are appalled by the comments made by Ron Schiller in the video, which are contrary to what NPR stands for. Mr. Schiller announced last week that he is leaving NPR for another job.”

The “full two-hour video” is posted here on Project Veritas’ website (According to Project Veritas, there is “one brief section in which the audio is redacted in order to ensure the safety of an NPR overseas correspondent.”).  It is labeled as “Part 1 of our NPR investigation and described as “largely the raw video and audio of the entire conversation with NPR Foundation’s President Ron Schiller.”

Project Veritas states on its website that it was founded by O’Keefe and its mission is “to investigate and expose corruption, dishonesty, self-dealing, waste, fraud, and other misconduct in both public and private institutions in order to achieve a more ethical and transparent society.” According to its website, it has “applied for 501(c)3 status and is awaiting determination.”

An 11-minute version is available here on YouTube. In it, the undercover activists  describe themselves as “citizen journalists posed as Muslims” and call themselves part of a group called the “Muslim Education Action Center Trust,” which is “fictitious.”

NPR’s David Folkenflik reported that “there were clear signs that the Muslim Education Action Center Trust was not a long-standing organization — Internet records show the center’s website was created in mid-January. The address for the organization? A UPS store.”

“The comments contained in the video are contrary to everything we stand for and we completely disavow the views expressed. . . . The assertion that NPR and public radio stations would be better off without federal funds does not reflect reality.”

MSNBC reported that “some members of Congress have called for cutting off federal funds” for public broadcasting.

“This video clearly highlights the fact that public broadcasting doesn’t need taxpayer funding to thrive, and I hope that admission will lead to a bipartisan consensus to end these unnecessary federal subsidies.”

He also stated that “Perhaps the truth finally came out and we’re going to proceed along those lines.”

Despite Vivian Schiller’s resignation, Cantor stated: “Our concern is not about any one person at NPR, rather it’s about millions of taxpayers.  NPR has admitted that they don’t need taxpayer subsidies to thrive, and at a time when the government is borrowing 40 cents of every dollar that it spends, we certainly agree with them.”

According to USA Today, the federally funded Corporation for Public Broadcasting (CPB) provides “about 2% or $2.4 million” of its budget.  This year, the CPB “is set to receive $430 million this year.”

The Chronicle reported that “The budget bill passed by the House last month would end funding for the Corporation for Public Broadcasting.”

“Similar efforts to strip funding from public broadcasting in 2005 and in the 1990s were unsuccessful.”

NPR’s Ombudsman Lisa Shepard answered readers’ questions about the changes at NPR in a March 9 online Q & A (See here).  She noted that PBS received the same offer that Ron Schiller did.  Also, Ron Schiller wasn’t fired for “harboring negative views about conservatives,” rather “it was the unprofessional manner that cost him his job.”

Shepard commented that Ron Schiller made his remarks in a “public” meeting in which he was “representing NPR” and “his job WAS to sell donors on NPR’s commitment to fairness, accuracy, thoroughness, and diversity of voices.  He hardly did that.”

Also, Shepard blogged about Ron Schiller and Vivian Schiller, reporting that “people at NPR [the day the tape was published] were angry and dazed by this episode, which is just the latest in a series of events that put the company in the worst possible light.  Doesn’t anyone in NPR’s top management think of the consequences before they act?”