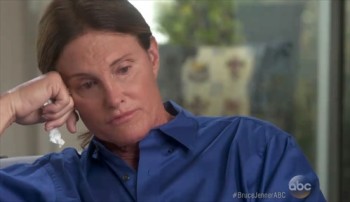 Bruce Jenner may sue over photos of him in a dress taken by a long-lens paparazzi photographer for X17 photo agency, the NY Post reported.

The photos showed what appeared to be Jenner wearing a striped long dress and were posted just before his much-watched interview with ABC News’ Diane Sawyer, where Jenner confirmed he is transitioning as a transgender woman.

Jenner’s spokesperson told the New York Post’s Page Six that “Both Daily News and CNN pulled the photos sold to them by X17 once they found out they were illegally obtained. The agency no longer is selling those photos [since] they confirmed they were shot illegally.” In addition, news outlets that republished the image shown on CNN have taken down the images or videos, iMediaEthics notes.

Jenner’s lawyer Marty Singer added: “The photos were clearly unlawfully taken from a very long distance using an enhancement device. Bruce Jenner is going to enforce his right to privacy.”

The Daily News‘ April 21 story, “Bruce Jenner seen wearing striped dress outside Malibu home,” now doesn’t include any of the paparazzi photos of Jenner.  It doesn’t appear to disclose why the images were removed.

The Daily News published the image on its front page April 22.

The Wrap, Mediaite and other sites reported on the New York Daily News and CNN publication of the video. CNN had reported in a broadcast segment about the Daily News photo, showing it.

Interestingly, the Daily News then complained to the Wrap and Mediaite  about re-posting CNN’s video coverage of the newspaper’s photo.  The Wrap reported in an update: “The New York Daily News requested TheWrap remove CNN video, because the network did not have the right to broadcast the photograph.”

iMediaEthics has asked CNN, X17 photo agency, and the Daily News for comment. We’ve also reached out to Jenner’s lawyer.

The Washington Post didn’t publish the photos explaining there is no confirmation the photos actually showed Jenner, they were published by a tabloid (the NY Daily News), the possibility the photos were “taken illegally,” and the fact the photos are not really in the public interest.

As iMediaEthics has previously reported, Jenner refers to himself with male pronouns, so the media is using those pronouns until he says he would like otherwise.