NY Daily News urges 'create your own flyover': for air force one 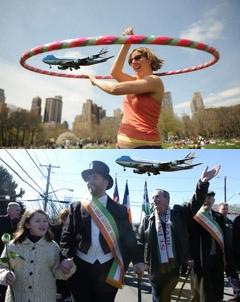 Who needs an expensive flyover? The News shows several examples--two shown here-of how easy it is to add Air Force One to any New York skyline image. For the first time StinkyJournalism agrees that Photoshop trickery was the ethical choice.

The New York Daily News asked on April 29 in the face of the flyover controversy: “Anyone in the White House ever hear of Photoshop?”

They were right. It would have been cheap and easy for White House staffers to simply add Air Force One to any photo they wanted via Photoshop to make their ideal official post card.

The Daily News continued: “The cost of flying one of Obama’s official planes – a pimped-out Boeing 747 – along with an F-16 jet over the city cost upwards of $300,000 in taxpayer dollars. In comparison, the latest deluxe version of Adobe Photoshop ‘CS4 Extended’ costs $999.”

The White House originally wanted images of the President’s plane over Ground Zero, Statue of Liberty and Ellis Island. So The News offered an image of the president’s plane for readers to try making their own flyover images. They even encouraged readers to upload their resulting creations onto the Daily News web site. “Attention News readers: Please copy this photo to craft your own doctored Air Force One photo. And see what we made.” Here are the results of reader participation.