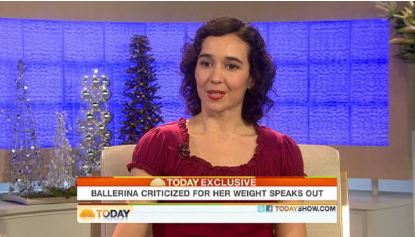 Jenifer Ringer, pictured above in a screenshot detail from the "Today" show, was criticized for her weight in a New York Times review. (Credit: MSNBC)

A New York Times critic has had the tables turned on him as bloggers have criticized him for his remarks about a dancer’s weight. The critic, Alistair Macaulay, wrote that the New York City Ballet ballerina playing the role of the Sugar Plum had eaten “one sugar plum too many.”

However, the 37-year-old ballerina, Jennifer Ringer, won’t be calling for an apology.  As the Daily Mail reported, Ringer stated on the Today show about reading the review:  “It made me feel bad, it’s embarrassing.”

“It is a field where our bodies are important,” she is quoted as saying. “As dancers we’re taught to try to be perfect in every way technically and in every way.”

But, was it OK for her body to be criticized?  She stated: “I think that that is a really complex question. As a dancer I do put myself out there to be criticized and my body is part of my art form. At the same time I’m not overweight. I do have I guess a more womanly body type than the stereotypical ballerina.”

The critic, Alistair Macaulay, wrote in his Nov. 28 review:

“This didn’t feel, however, like an opening night. Jenifer Ringer, as the Sugar Plum Fairy, looked as if she’d eaten one sugar plum too many; and Jared Angle, as the Cavalier, seems to have been sampling half the Sweet realm. They’re among the few City Ballet principals who dance like adults, but without adult depth or complexity.”

In a follow-up posting Dec. 3, Macaulay acknowledged that his words “caused a certain brouhaha online, and a minor deluge of reader e-mails, in many cases obscene and abusive.”  He noted for example, that one reader described his review as “appalling,” “heartbreaking,” “childish, “hurtful” and “incompetent.”

He explained that readers were upset over his comments about Ringer — but not about his similar criticism of Angle.  And, he noted that “scarcely a reader objected” in his criticisms of Nilas Martins and Mark Morris in another article.  “Fat, apparently, is not so much a feminist issue as a sexist one. Sauce for the goose? Scandal. Sauce for the gander? No problem,” Macaulay wrote.

“Dancers do not ask to be considered victims. When I’ve praised Ms. Ringer, I’ve applied the standards I’ve applied to” other ballerinas.

“Some correspondents have argued that the body in ballet is ‘irrelevant.’ Sorry, but the opposite is true. If you want to make your appearance irrelevant to criticism, do not choose ballet as a career. The body in ballet becomes a subject of the keenest observation and the most intense discussion. I am severe — but ballet, as dancers know, is more so.”

The blog Jezebel spoke out against Macaulay’s review.

“While it’s the reviewer’s job to critique the dancer’s performance, commenting on their debatable weight gain just seems cruel. Particularly because in a recent Working Mother magazine profile, Ringer revealed that she once struggled with anorexia and compulsive eating.”

“While I understand the general point made by Mr. Macaulay about the role of criticism, I am still searching for the extra pounds he spotted on Ms. Ringer, who clearly isn’t overweight by any standard. More important, I’m troubled by the suggestion that an emaciated dancer is somehow more pleasing to watch. To my eye, Ms. Ringer, who has talked openly about struggling with disordered eating, looks like the ideal ballerina — an athletic, graceful woman who dances with strength.”

iMediaEthics is writing to Macaulay to see if he has any further comment about the reaction his review provoked.