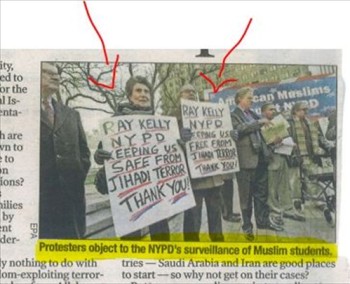 WHOOPS! The above NYPost picture shows NYPD supporters, but the caption says they are protesters. (Credit: NYPost, highlight and marking added)

The New York Post erred in its photo caption for a picture accompanying a March 25 article by Phil Mushnick, “Islamic Activists get Media Pass.”

The caption for the photo accompanying the print version of this article reads “Protesters object to the NYPD’s surveillance of Muslim students.”

However, the photo shows people holding signs thanking NYPD’s Ray Kelly — therefore in support of NYPD and not objection.

The photo and errant caption do not appear online, but we have uploaded a PDF of the print edition article and photo here.

We have written to the New York Post asking if it plans to correct this apparent error and will update with any response.