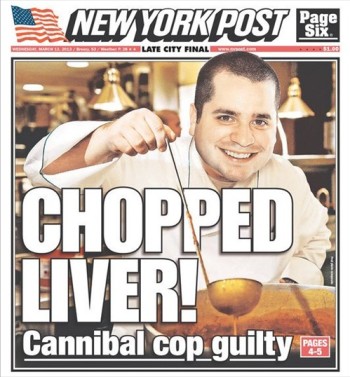 NOT AN EYE TEST: Can you spot the disclosure? (Credit: NYPost, via Newseum, screenshot)

Is the New York Post’s front-page photo a fake?

Yes, at least in part. However, unless you took a magnifying glass to today’s newspaper, you’d miss that the doctored photo is labeled a “Post Photo Composite.”

The image of Gilberto Valle, the so-called “cannibal cop,” is too good to be true. Valle was convicted March 12 “in a bizarre plot to kidnap, torture, kill and eat women,” the New York Times reported, noting that “there was no evidence that any of the women whom the officer, Gilberto Valle, was accused of plotting to kill were harmed.”

And the Post’s front-page photo conveniently pictures Valle dressed in white as a chef, no less, holding a soup ladle inside what appears to be a kitchen.  Surely the Post didn’t just luck upon a perfect shot for its “Chopped Liver!” cover.

But, after half an hour of looking at the online version of the photo, iMediaEthics finally spotted a tiny disclosure INSIDE  the photo confirming our suspicions: The New York Post created a composite — or Photoshopped — photo.

In very small print the Post did disclose that its front page photo was a “composite.” Compare the font size of the disclosure, circled in red, with the font size of the headline letters “ED.” See above a detail image from the print version of the paper.  It’s very easy to miss this disclosure. (Credit: NYPost, scan, red circle added)

Typically, such disclosures and photo credits are placed outside the photo, not INSIDE it. See how the Post labeled another photo composite today. The disclosure for this Page 33 illustration of Lloyd Blankfein is clearly outside of the image and, thus, far easier to notice.

In another photo illustration today, the New York Post labeled the photo as a composite OUTSIDE of the image, not INSIDE. (Credit: NYPost, scan, highlight added)

Also, the font size and style for this smaller illustration (photo composite) appears significantly larger and more visible than for the front page disclosure.

From iMediaEthics’ search of photos of Valle, it appears the Post used the below headshot photo of Valle.

For comparison’s sake, check out below a GIF of the Photoshopped cover and the headshot of Valle.

Compare the Post’s Photoshopped cover with what looks to be the real photo of Valle. (GIF Credit: Robert Slawinski/iMediaEthics)

UPDATE: 3/13/2013 4:50 PME ET: Check out a side-by-side comparison of the two “Composite” disclosures.  The front page disclosure (bottom) is in a smaller font style than the disclosure for the Page 33 composite (top).

COMPARE TOP IMAGE WITH BOTTOM :  The top shows The NYPost’s disclosure, “Post Photo Composite,” on page 33. The bottom image is the same Post disclosure, but pasted into the front page image. Please note that the front page disclosure was placed inside of the illustration and in a smaller font style, making it harder for readers to find. (Credit: NYPost, scans of print pages, circle added)

Gardephe “ordered the detention, electronic monitoring and mental health treatment for Valle at the request of prosecutors, who said they were appealing the judge’s decision. Valle was also ordered to stay off the computer and to keep away from his alleged victims,” according to the New York Daily News.

Valle was in jail for 21 months, the Daily News reported. He apologized “to everyone who’s been hurt, shocked and offended by my infantile actions.”