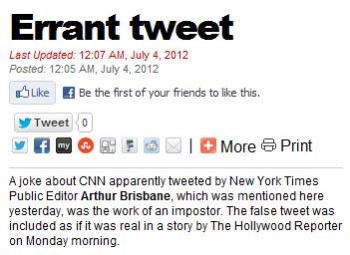 The phony Twitter account, @timespublicedit, tweeted jokingly “CNN is reporting that Anderson Cooper is straight,” after Andrew Sullivan published an e-mail from Cooper in which the CNN host acknowledged that he is gay.

“Pondering the tough questions, like, Should a newspaper really be ‘reporting’ ‘facts’? This may be a fake account, but I am no truth vigilante.”

The Page Six blurb has since removed any reference to Brisbane, but has no correction or disclosure to readers. The only indication that the post has been changed is a new “update” time of July 3, 2012 1:36 PM EST.On a separate July 4 Page Six post, the Post wrote:

“A joke about CNN apparently tweeted by New York Times Public Editor Arthur Brisbane, which was mentioned here yesterday, was the work of an impostor. The false tweet was included as if it was real in a story by The Hollywood Reporter on Monday morning.”