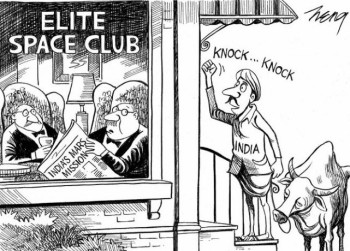 The Times apologized for this cartoon.

The New York Times apologized after publishing a cartoon many readers found racist against India.

The Sept. 28 cartoon showed a mustached man labeled “India” wearing a turban. The man, holding a cow on a leash, is knocking on the door to an “Elite Space Club” where two older men are reading a newspaper carrying the headline “India’s Mars Mission.”

Rosenthal’s apology was posted on the Times‘ Facebook Oct. 5. He denied the cartoonist, Heng Kim Song, was racist in his cartoon but apologized for any offense nonetheless.

Rosenthal said the cartoonist was trying to be “provocative” and that he was “in no way trying to impugn India, its government or its citizens.”

“A large number of readers have complained about a recent editorial cartoon in The International New York Times, about India’s foray into space exploration. The intent of the cartoonist, Heng Kim Song, was to highlight how space exploration is no longer the exclusive domain of rich, Western countries. Mr. Heng, who is based in Singapore, uses images and text – often in a provocative way – to make observations about international affairs. We apologize to readers who were offended by the choice of images in this cartoon. Mr. Heng was in no way trying to impugn India, its government or its citizens. We appreciate that readers have shared their feedback, which we welcome.”

The India Times reported that “The offending cartoon ruffled a lot of desi feathers for its depiction of India and Indians as cattle-rearing folks.”

“The timing was also ironic, seeing how the sketch had been published after Prime Minister Narendra Modi declared to the world at Madison Square Garden that we were no longer a country of snake-charmers,” the India Times added.

iMediaEthics has written to the New York Times to ask how many complaints it received over the cartoon and where the apology was published besides Facebook. We were unable to find contact information for the cartoonist.