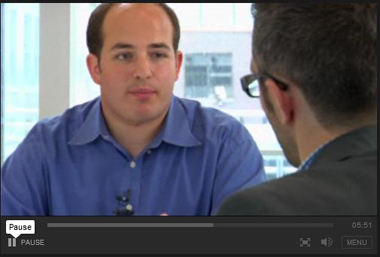 Brian Stelter, a reporter for the New York Times, said in a Times Cast interview that he bought an iPhone. NYT Pick said that's an endorsement. (Credit: TimesCast video)

Stelter was being interviewed about the new iPhone 4.   Consumer Reports wrote July 12 that it couldn’t recommend the iPhone 4.

NYT Picker wrote that Stelter’s statements amounted to an endorsement, and the New York Times’ policy on ethics in journalism says staffers can’t made endorsements. That is, Item 50 in the newspaper’s policy states, “Staff members may not offer endorsements or testimonials for books, films, television programs or any other programs, products or ventures.”

NPR’s media correspondent David Folkenflik questioned on Twitter if the NYT Picker would have cared if Stelton had said he was a Bruce Springsteen fan.

To that, NYT Picker wrote that it doesn’t view Springsteen as a product, and definitely not an exclusive product – buying a Springsteen album doesn’t prevent one from buying an album by another artist, but most people don’t have two cell phones.

LostRemote blogged March 23 when the Times started TimesCast, a daily “behind-the-scences video” featuring interviews with the Times employees that Stelter tweeted July 9 that he ordered an iPhone and wrote June 8 about the new iPhone, saying “Apple may have just taken another groundbreaking step in the age of citizen journalism. ”

The NYT Picker “devotes itself exclusively” to analyzing the New York Times and is written anonymously.

iMediaEthics has written to Brian Stelter and will post any response.