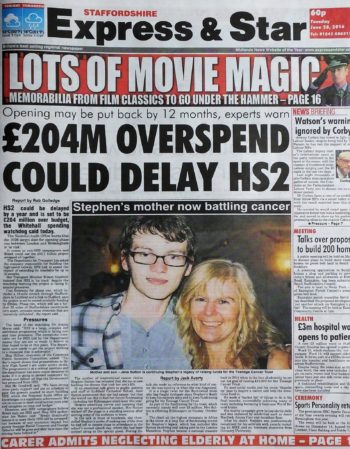 A UK newspaper, the Express & Star, mistakenly reported on its front page that a woman has been battling cancer Now the newspaper is apologizing to Jane Sutton, whose son Stephen died from cancer in 2014. The newspaper’s front-page subhead this week declared: “Stephen’s mother now battling cancer.”

“Jane has nothing further to comment on the situation at the moment and if she feels it necessary to say anything further, she will issue a post on Stephen’s Story,” her Facebook page, her rep told iMediaEthics.

In that Facebook post, Sutton said the Express & Star didn’t “listen attentively to my speech” because the reporter misinterpreted her reading from her late son’s previous personal statement about having cancer to mean that she was saying she had cancer. She said this has never happened to her before.

“That person also had plenty of opportunity to ask me about what they thought they had heard,” she commented, noting that it wouldn’t make sense for her to disclose a cancer diagnosis at a speech.

“Whilst I can accept people make mistakes and can misinterpret statements, what is unforgivable in my view, is to publish a story without first verifying the facts,” Sutton wrote. “I received a phone call yesterday at 12.25 pm from the person who wrote the report. I was not able to take the call as I was at work. The Express and Star is fully aware I work full time and therefore my ability to respond to any queries during the day is very limited.”

According to Sutton, the Express & Star reporter’s voicemail didn’t ask about any cancer diagnosis. The reporter did, however, contact the Teenage Cancer Trust, a UK charity for which Sutton’s son raised money and Sutton is an Ambassador, to ask about the cancer diagnosis. But, before hearing back from either Sutton or the Teenage Cancer Trust, the newspaper went ahead and published its story, she wrote. iMediaEthics has asked the Express & Star for a response and to verify this chain of events.

“I find it inexcusable for the newspaper to publish a story with such personal significance without any confirmation at all,” Sutton commented. “There was and is no story to report! The only reason there could possibly be for publishing this morning was for the sensationalist headline.”

The Teenage Cancer Trust’s Ruth Law told iMediaEthics by e-mail, “There is absolutely no truth in the mistaken reports that Jane Sutton has cancer.  She is well and training for her next challenge, climbing Kilimanjaro in October, to raise money for Teenage Cancer Trust.”

According to UK media news site Hold the Front Page, the Express & Star’s editor Keith Harrison apologized for the significant error, explaining the paper made a mistake in reporting on Sutton’s recent appearance and presentation at an event. Harrison hasn’t yet responded to iMediaEthics inquiry.

“The story was published in good faith, following a presentation Jane gave in Lichfield over the weekend,” Harrison said. “The correct checks were not made prior to publication and, clearly, there was a misunderstanding leading to the mistake. We have apologised to Jane and will also be carrying a correction and printed apology tomorrow. The Express and Star will also be making a donation to the Teenage Cancer Trust.”

When asked if the newspaper has initiated its donation yet, the Teenage Cancer Trust said “We don’t have that information at the moment unfortunately.” iMediaEthics has asked the newspaper how much it is donating.

The Express & Star has deleted its article. A link to the UK Daily Mail’s article claiming Sutton had cancer has also apparently been deleted. See below Google search results showing the two article links. The Mail hasn’t responded to iMediaEthics’ inquiry.

The Mirror also published and deleted a report inaccurately claiming Sutton had cancer. See below a screenshot. The Mirror declined to comment to iMediaEthics about the deleted reports.