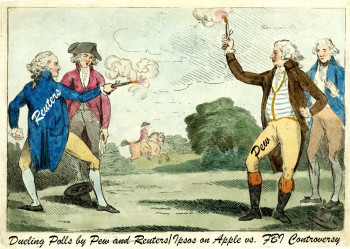 (Credit: illustration based on antique print called The Royal Duel)

Two recent polls suggest that, in the controversy over Apple’s refusal to help the FBI unlock an iPhone that belonged to one of the killers in the San Bernardino attacks, the American public either sides with the FBI by a 13-point margin, or sides with Apple by an 11-point margin.

These contradictory findings are the result of less-than-ideal question wording, which essentially manipulated the poll respondents in one direction or the other.

The Controversy and the Polls

When the FBI recovered the iPhone of Syed Farook, who along with his wife committed the murders and was killed in a shootout, the Feds discovered they could not access the information because of the phone’s password protection. The FBI asked Apple to write a program to unlock the phone, but Apple has refused. As The Guardian points out, the controversy has serious implications for everyone’s privacy.

This month Pew conducted a telephone poll of the public and reported that Americans sided with the FBI by a 13-point margin, 51% to 38%. Reuters, with its partner, Ipsos, conducted an online poll over virtually the same time, but found a public that favored Apple by 11 points, 46% to 35%. 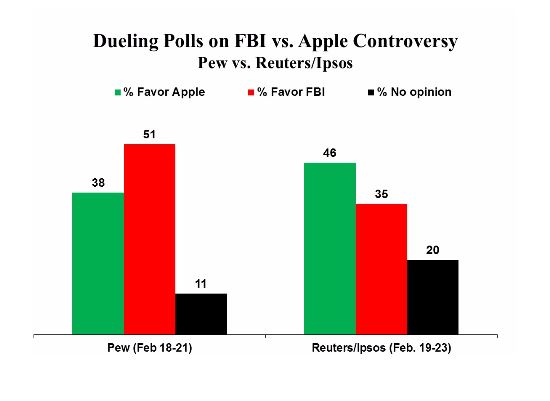 One possible explanation for the differences is the mode of interview – telephone vs. online samples. But the differences in question wording alone may be enough to explain the conflicting findings.

“How much if anything have you heard about a federal court ordering Apple to help the FBI unlock an iPhone used by one of the suspects in the San Bernardino terrorist attacks?

For respondents who didn’t know much about the issue (well over half, according to Pew), this framing would no doubt prejudice the respondents in favor of the FBI. When Pew next asked whether Apple should unlock the phone or not, it offered arguments for both sides:

“As you may know [responses were rotated], the FBI has said that accessing the iPhone is an important part of their ongoing investigation into the San Bernardino attacks, while Apple has said that unlocking the iPhone could compromise the security of other users’ information.”

Do you think Apple [responses rotated]:

Despite arguments for both sides, the original framing of the issue as one dealing with “terrorist attacks,” along with the fact that there is little explanation for Apple’s concern about the security of other users’ information, make the overall question seem much more favorable to the FBI than to Apple. And the poll results reinforce that point.

Reuters/Ipsos, by contrast, appears to go all in for Apple, asking this tendentious question:

“Apple is opposing a court order to unlock a smart phone that was used by one of the shooters in the San Bernardino attack.

“Apple is concerned that if it helps the FBI this time, it will be forced to help the government in future cases that may not be linked to national security, opening the doors for hackers and potential future data breaches for smartphone users.

“Do you agree or disagree with Apple’s decision to oppose the court order?

Note that Reuters/Ipsos gives the respondents an extended argument in favor of Apple’s position, but no argument supporting the FBI. With such an unbalanced question, it’s not a surprise to see positive results for the computer company.

By asking tendentious questions and feeding biased information to respondents, each poll was creating its own illusion of “public opinion,” and contradictory illusions at that.

Neither can be trusted to reflect what Americans are really thinking.