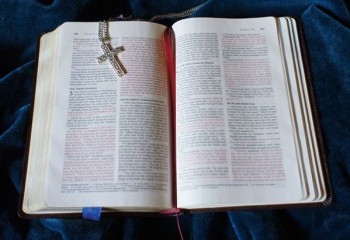 It’s a biblical distinction with a difference.

The Lexington Dispatch wrongly published that a reader thinks President Barack Obama is the Antichrist.

But the reader, Boyd Thomas, actually wrote that he thinks Pres. Obama may be the seventh king that briefly rules before the Antichrist in the Book of Revelations.

Chad Killebew, the Dispatch‘s executive editor, confirmed to iMediaEthics by e-mail that the Christian holy book reference correction is real.

The reader who wrote the letter to the editor in the Dispatch, a Davidson County, North Carolina newspaper published five days a week, flagged the headline error, Killebrew told iMediaEthics.

The Feb. 12 correction is making the rounds on social media.

Here is the Dispatch correction:

“Boyd Thomas’ letter Saturday contained an error in the headline. He does not believe President Obama is the Antichrist, who will come after seven kings, according to Revelation. He thinks Obama could be the seventh king.”

A picture of the print correction was posted on Twitter by N.C. copy editor R. L. Bynum.

Correction in the Lexington Dispatch. pic.twitter.com/2OSQHaa9Xx

The headline has since been changed to read “Is Obama the seventh king?“, although the correction itself isn’t published online with the letter to the editor. When asked why the correction wasn’t online, Killebrew told iMediaEtics that “we typically just correct items online, rather than leave the initial incorrect information.”

The letter’s headline originally read, “Is Obama the Antichrist?” according to Talking Points Memo.

Thomas’ Feb. 6 letter asks, “God states that seven kings must come before the rise of the Antichrist. Revelations 17:10 says the seventh king will reign for a short amount of time. Is Barack Obama the seventh king?”

Killebrew pointed iMediaEthics to his recent column about the newspaper’s letter’s policy:

“The Dispatch publishes almost all letters to the editor that arrive. We have a few guidelines: Letters must be 500 words or less, be signed (no anonymous letters), not be poems or business complaints, and not contain libelous or false information. Writers can only have one letter per month appear.

“Some folks would like me to censure letters and have a stricter threshold for what publishes. But I believe in allowing as many people to voice their opinions as possible, whether I personally agree with their position or not. I do my best to make sure their points are accurate and edit out anything I know is wrong. Sometimes a person will take a fact and then interpret it in a rather odd way, or they will use what I consider dubious sources to support their position. Those can be challenging to deal with.

“I always encourage those who disagree with a writer to pen a response. You can email it to letters@the-dispatch.com or mail it to The Dispatch, P.O. Box 908, Lexington, NC 27293 (typed if at all possible).”

The Dispatch has a circulation of about 7,700 copies, according to Mondo Times.

Below see tweets about the correction.