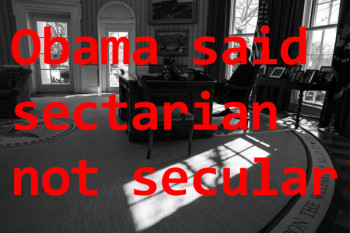 Sectarian, secular, two different meanings. One, sectarian, is of or pertaining to a religious sect. The other word, secular, means almost the direct opposite, anything having no relation to religion.

So how did the Washington Post mix up the two in a report on President Barack Obama’s speech at the White House Summit on Countering Violent Extremism?

iMediaEthics looked up the original article on NewsDiffs. It stated: “President Obama told representatives of more than 60 countries Thursday that they must address secular strife and other economic and political grievances to blunt the appeal of terrorist groups worldwide.”

But, Obama was talking about sectarian strife not secular strife, according to the correction.

A correction at the top of the Feb. 19 article reads:

“Correction: An earlier version of this story incorrectly quoted President Obama as saying the world must address “secular conflict.” He actually said “sectarian.” The headline and first paragraphs of this version have been corrected.”