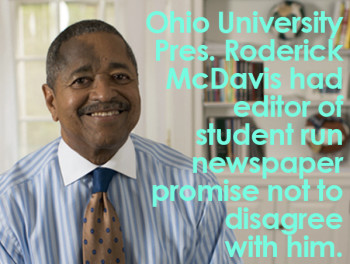 The Post, the student-run newspaper for Ohio University, apologized to readers after an opinion editor made a secret agreement not to publish negative editorials about Ohio University President Roderick McDavis’s op-eds for 24 hours.

That opinion editor was suspended for two weeks over the matter.

The editor — who is unnamed — set up an arrangement to have the school’s president McDavis write op-eds for The Post, promising that the newspaper wouldn’t run “any conflicting opinions from The Post staff for 24 hours,” the newspaper’s op-ed stated.

But no other editors or staff at the newspaper knew about that deal not to criticize the president. The Post explained that the arrangement was “inappropriate and a violation of newsroom policies.”  The newspaper found out about then deal when it unknowingly broke the agreement by criticizing McDavis.

Bethany Venable, an Ohio University spokesperson, responded to iMediaEthics’ inquiry to President McDavis and his chief of staff Jennifer Kirksey. Venable confirmed that the opinion editor asked McDavis to write op-eds. “In exploring this opportunity, the President’s chief of staff discussed with The Post’s opinion editor guidelines and expectations, such as frequency of contribution, word count, topics of interest, and headline writing,” Venable told iMediaEthics.

Venable said that since Kirksey isn’t a journalist she didn’t know this arrangement was unusual. “The President’s chief of staff is not a journalist, so when she was told the op-ed would stand alone, she felt no reason to question the validity of her request,” Venable said.

Venable explained the conversation chief of staff Kirksey had with the opinion editor:

“When the chief of staff asked if the op-eds would stand alone on the day of publication, she was told yes, they would. If she were told no, she would have proceeded accordingly. It was not a 24-hour requirement, nor was it a requirement or condition for the President to serve as a contributor. She asked in order to gain an understanding of the guidelines and expectations.

“However, because the opinion editor agreed to allow the President’s op-ed to stand alone upon publication in order to allow readers to read and respond to his column, the President  moved forward under that assumption and was surprised to find out that the rest of the editorial staff was unaware of this arrangement.”

McDavis’s April 12 op-ed called for “honesty, optimism and open-mindedness when voting for Student Senate.” The Post‘s editors’ op-ed on the same day acknowledged that McDavis’s advice was a “valid point” but argued that he ignored “the elephant in the room.” The Post questioned why McDavis didn’t respond to complaints from “students, faculty and alumni” about McDavis and his wife moving two miles away from campus.

“While those close to McDavis have come out in defense of the choice, the president has yet to publicly comment on the controversy surrounding his move, financed by the OU Foundation,” the Post wrote. The Post op-ed suggested that McDavis should have used his op-ed to “say something far more valuable” by responding to “campus conversation and concerns of students.”

After that critical op-ed, McDavis’s chief of staff Jennifer Kirksey complained and even canceled “a meeting between the president and a Post reporter,” The Post said.

iMediaEthics asked The Post if it has re-scheduled the meeting with McDavis, why it didn’t name the editor suspended, and if McDavis will continue to write for The Post. Editor Jim Ryan declined to comment, pointing iMediaEthics to the newspaper’s editorial.

However Venable, the university spokesperson, told iMediaEthics that “The interview was cancelled because the president’s office was very uncomfortable with the position in which they were placed as a result of a breakdown in communication that happened within The Post.

“It was determined it would be best to gain clarification about expectations before proceeding with additional interviews,” Venable wrote, but she said that the president’s office’s relations with the paper is back to normal. “We are continuing to meet with reporters from The Post and reply to their requests as we always have,” she wrote. “We have upcoming meetings scheduled to welcome the new editor, as well as the incoming reporter assigned to cover the president’s office beat. These are traditional meetings we like to have as the paper changes editors and staff positions each year.”

After the complaint and dust-up with the president’s office, The Post said it investigated the arrangement and learned that “the opinion editor acted alone, making the verbal agreement with McDavis and Kirksey.”

“Not only did The Post’s Monday editorial dishonor an agreement the rest of the executive staff was unaware of, but the publication’s editorial independence also could have been compromised as a result,” The Post explained. “And although the agreement wasn’t conceived by a Post employee, a Post employee approved it — potentially calling into question a fundamental tenet of our newsroom: How only Post employees can dictate what is published by The Post.”

The newspaper added that, “to the best of our knowledge, The Post has never held back publication of a story or opinion piece because of an op-ed written by McDavis or any other individual or group The Post covers. For the record, like everything else we publish, the decision to publish this editorial was ours alone.”