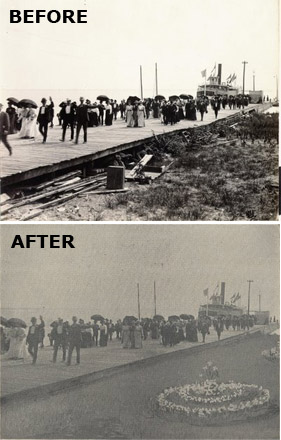 In the early 1900's, photo alterations were commonplace. Flowers were added, to what appears to be a construction site. Pre-computer fauxtographers would fuse or "composite" multiple images into one scene during the darkroom printing process.

” Someone found a photo in the library’s historical archive that had been later doctored for use in a promotional book.

” Check the original post for bigger photos. It is interesting to see how the photo, circa 1900, could be altered so well – as opposed to some of the bad work being done now with Photoshop.

” This shows that fun can come from library archive, especially photo archives. Also, too, the subject of the photo is interesting. It’s the dock of Cedar Point, an amusement park in Sandusky, OH. “