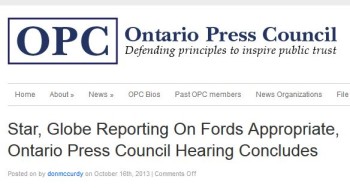 Over the past month, Toronto mayor Rob Ford’s use of drugs and alcohol has been back in the news as the Toronto Police said in an Oct. 31 press conference that it had obtained a video of Ford smoking crack. In light of the police statement, after months of denials, Ford finally publicly admitted to using crack, and most recently, on Nov. 7, apologized after the Toronto Star bought and published yet a different video of a drunk Ford threatening to kill someone.

But, what you might have missed in all of these attention-getting reports about the mayor is a recent press council judgment ruling about the way two Canadian newspapers reported on Ford and his brother, councilor Doug Ford.

The Ontario Press Council recently ruled on complaints from the public against Canadian newspapers the Toronto Star and Globe and Mail Oct. 16.

Perhaps unexpectedly, the Council’s investigation was driven only by public complaints, as it never received any complaints from the mayor or his brother, accused of involvement with drugs by the two Canadian newspaper giants. Less surprising, they also didn’t attend the hearing.

Complaints Filed against Toronto Star and Globe and Mail

Central to the press council’s investigation were two stories: The first was the Toronto Star‘s May 17 report “Rob Ford in ‘crack cocaine’ video scandal,” and second, the Globe and Mail’s May 25 story, “Globe Investigation:  The Ford family’s history with drug dealing.”

Both Canadian reports came after the U.S.-based Gawker — and then the Toronto Star — claimed to have seen a video showing mayor Rob Ford smoking crack. Gawker broke the story with editor John Cook’s account of being offered the video in exchange for cash. Neither outlet was able to secure the video for publication, which prompted doubts that the story was real.

It is important to remember that the press council ruling came in mid-October, just weeks before the police confirmed the Star’s reports of Ford’s drug use. At the time of the ruling, the public had to take the Toronto Star’s word that it had in fact seen a video of Ford smoking crack, since the Star wasn’t able to get that video for publication.

The press council complaints focused on the Star, for reporting on the video without producing it, and the Globe and Mail for reporting about Ford’s brother, Doug Ford, and alleged involvement with illegal drugs based on anonymous sources. The Globe and Mail “relied on 10 unnamed sources in a story about Councillor Ford, each of whom said they had direct knowledge of having ‘purchased hashish from Doug Ford, supplied him with hashish or witnessed him possessing large amounts of the drug,'” according to the Globe and Mail.

The council decided that “The Toronto Star and Globe and Mail each followed appropriate journalistic guidelines when producing and publishing stories about alleged drug involvement by Toronto Mayor Rob Ford and his brother, Toronto Councilor Doug Ford.”

The council also called for news outlets to show the public more transparency of the journalistic process.  Because the complaints concerned how the two newspapers reported on the allegations of drug involvement by the Fords, the council said it thought the newspapers and all news organizations should give more behind-the-scenes information on how the stories came to be and why certain claims were published, like when they are based on anonymous sources.

“Not enough has been done to build public understanding of the laws and regulations governing the role of the media and news coverage – particularly where investigative journalism techniques are employed,” the council wrote. “When writing stories where such techniques are used, it urges news organizations to make better efforts to explain their approach and why it serves the public interest.”

Public editors for both papers also responded to the council’s hearings.

In a blogpost, Globe and Mail public editor Sylvia Stead answered the council’s call for more transparency in how reporting works behind the scenes by offering “the backstory” on the newspaper’s reporting on the Fords, which included a long investigation and verification of what the source said. “There is no question that, as the Ontario Press Council said, the media is a powerful institution and that it needs to be open and transparent,” Stead wrote, adding that there are many “checks and balances” at the Globe and Mail.Outside of the initial reporting and editing process, there are: “the Press Council, lawyers, a public Code of Conduct, and a Public Editor.”

Stead said that Globe and Mail reporters researched and reported for 18 months on “Doug Ford and allegations of his drug dealing,” after being tipped off by many sources. The reporting process itself included

The Toronto Star‘s English also responded to the council’s call for transparency from them and the media at large.  Her response was tougher on the council’s conclusions, as she defended her own paper, the Star, and its competitor the Globe and Mail, from the council’s criticism that more could have been done to be transparent.

While she acknowledged that the public doesn’t understand everything that goes on in reporting, she argued that the Star and the Globe and Mail took enough steps to inform the public. The newspapers “went to great lengths to explain to readers the public interest aspects of their reporting on the Fords and the steps taken to verify information in line with standards set out by our internal codes of conduct and the law’s standards of responsible journalism,” she wrote.

After the police confirmed the video existed in October, English wrote a spirited public editor column supporting the Toronto Star’s work on the story especially in light of criticsm and doubters. English wrote:

“To anyone who somehow believed the Toronto Star would ever, ever ‘make up’ its explosive story about Mayor Rob Ford and the ‘crack cocaine’ video, I am trying to resist the urge to say ‘I told you so.’ Can’t though because indeed, I did tell you so.”

English quoted Star editor Michael Cooke commenting on the way some doubted the Star’s reporting, which the Star stood by from the beginning. The Star was “accused of a conspiracy” by Ford’s supporters, he told English, adding that the police investigation and public statements that the video did in fact exist and show what the Star said it did was “a grand day for diligent, honest and brave investigative reporting by Toronto Star journalists.”

In an Oct. 16 radio interview with AM 640 in response to the ruling — prior to the release of the drunken Rob Ford video and the police confirmation of the crack video — Doug Ford called the press council a “bunch of cronies,” in response to the ruling, according to the Globe and Mail.  He went on to suggest of the council, “a lot of them probably worked for the Toronto Star at some point.”

However, The Globe and Mail reported that Ford’s claims aren’t correct. According to the Globe and Mail, the three people in charge of the hearing weren’t affiliated with either newspaper.

According to the Ontario Press Council, the three panel members were Geoge Thomson, whose background is in the courts and law; Joanne De Laurentiis, President and CEO of the Investment Funds Institute of Canada; and Dreg Gragg, deputy editor of the Ottawa Citizen.

iMediaEthics has reached out to the press council for comment on Ford’s claims and will update with any response.