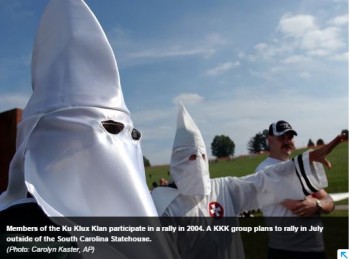 This Associated Press image of KKK members was published on Twitter with USA Today's story on what you should know for the weekend. (Credit: USA Today/AP)

USA Today seemingly suggested readers would want to go to a Ku Klux Klan rally in Columbia, South Carolina yesterday. The KKK rally was to protest the Confederate flag being taken down from the state capitol building.

USA Today‘s July 18 tweet said “What’s going on this weekend? We’ve got you covered” along with a picture of hooded KKK members. It linked to this USA Today article, “5 things you need to know this weekend” that reported:

“KKK to rally at S.C. statehouse

“The Loyal White Knights will protest the removal of the confederate flag from South Carolina’s statehouse grounds Saturday. “Our government is trying to erase white culture and our heritage right out of the pages of history books,” an automated message on the group’s answering machine said. Protesters can reserve the statehouse grounds online at a first-come, first-serve basis. The KKK-associated group will meet from 3 p.m. to 5 p.m. ET.”

The tweet “struck many readers as offensive, and we agree,” USA Today admitted.

According to USA Today, Twitter pulled the KKK image to go with a scheduled tweet. USA Today didn’t intend for the KKK rally picture to be tweeted with the weekend tips.

“When an editor programmed the tweet to publish at 7 a.m., we didn’t know that an automatic scraper from Twitter would pull in the image of the KKK rally,” USA Today explained. “We didn’t have a way to preview this, and the result was a tweet that we regret. In our internal content management system, we had chosen a different photo to default with that article, but this selection did not carry over to the image that Twitter automatically pulled in with the link.”

Below, see a screenshot of the tweet, posted by @marymad. USA Today went on, “USA TODAY uses tools to keep readers informed and engaged at all hours of the day. These constantly evolve, and so do we. We’re taking another look at our software and practices to make sure something like this doesn’t happen again.”

An earlier tweet about "5 things to know this weekend" had a misconstrued juxtaposition of words and image. It has since been deleted.

iMediaEthics has written to USA Today to ask how long the tweet was posted.