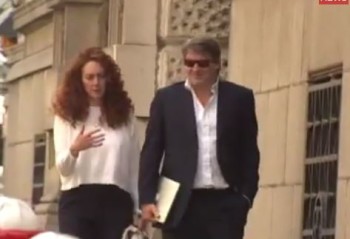 Some of the verdicts in the UK phone hacking trial have come in today.

Rebekah Brooks, the former News International CEO who resigned in 2011 as more and more phone hacking accusations were made about at the company, was found not guilty of all of the charges against her. Brooks was charged with phone hacking, “conspiracy to commit misconduct in public office,” conspiracy to pervert the course of justice.

Andy Coulson, a former News of the World editor and the former communications director for Prime Minister David Cameron, was found guilty of conspiracy to hack phones.

Coulson was charged with “conspiracy to commit public misconduct in public office” and phone hacking. The jury has only issued a verdict on the charge of conspiracy to hack phones.

According to The Guardian, “The judge instructed [the jury] to deliberate further and gave them a majority direction, which means they can return with a verdict that is not unanimous.” Besides charges against Coulson, the jury has to decide charges against former royal editor Clive Goodman, who is charged with “conspiring with Coulson to commit misconduct in public office.” Goodman was previously convicted of phone hacking back in 2007.

Coulson’s former employer, the prime minister, apologized for hiring Coulson today. He said hiring Coulson “was the wrong decision and I am very clear about that.” Below, see his “full and frank apology.”

Cameron has already been criticized by UK Labour leader Ed Miliband for Coulson’s hiring.  Miliband said, according to the New York Times,  “We now know that he brought a criminal into the heart of Downing Street.” He went on,

“This isn’t just a serious error of judgment, it taints David Cameron’s Government because we now know that he put his relationship with Rupert Murdoch ahead of doing the right thing.”

Four others on trial were found not guilty of the charges against them:

On the charge of conspiracy to pervert the course of justice,

were found not guilty, The Guardian reported.

Former News of the World managing editor Stuart Kuttner was found not guilty of phone hacking. Kuttner said after the verdict that he owes “a huge and enduring thanks” to his lawyer, CNN reported.

News UK issued a statement on its website about the verdict:

“We said long ago, and repeat today, that wrongdoing occurred, and we apologised for it.  We have been paying compensation to those affected and have cooperated with investigations.

“We made changes in the way we do business to help ensure wrongdoing like this does not occur again.  And we are strong supporters of the Independent Press Standards Organisation that is expected to begin work this autumn, serving as a watchdog on the industry in the public interest.

“Out of respect for the fact that further legal proceedings will occur, we will have no further comment at this time.”

For a full list of the charges against the eight put on trial, read iMediaEthics’ October report.