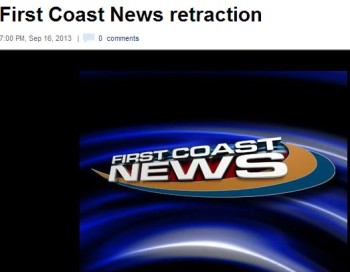 Florida’s First Coast News aired the wrong photo of a man involved in a car accident that killed a woman.

The error was made in a story reporting on the accident: A 66-year-old man named Michael Fortunato hit Esther Ohayon and her daughter with his car when they were crossing the street. Ohayon died and her daughter was “in critical condition,” First Coast News reported.

First Coast News news director Kathy Williams told iMediaEthics by phone that the inaccurate photo was shown “only in one broadcast” and in a report online.

First Coast News admitted it aired a picture of someone with the same name as the man driving the car in a retraction on the TV news station’s website.

“On Sunday, we showed the photo of another Michael Fortunato from Jacksonville in our broadcast,” the retraction read.  “First Coast News regrets the error, and apologizes to Mr. Fortunato for showing his photo during Sunday’s broadcast.”

Williams also told iMediaEthics: “We found out” the picture was of the wrong Michael Fortunato “because the other Michael Fortunato called the next day” after the report was aired. The retraction was published online and aired “in the 6 p.m., 7 p.m., 11 p.m., and the following morning on the morning show,” she added.

The accident, injury and death got even more attention from the media because four year ago, Fortunato’s car fatally hit a six-year-old named Kaitlyn Springer.

Florida Highway Patrol Public Affairs Officer Sergeant Dylan L. Bryan confirmed to iMediaEthics that it was the “same driver for both” the Ohayon and Springer incidents.  For Springer’s death, “no charges were issued to the driver,” but “the current FHP investigation is still on going” for the Ohayons.  ” If charges in our case revealed warranted, then they will be issued at that time,” Bryan wrote to iMediaEthics.

ActionNewsJax.com, the website for Jacksonville CBS-affiliate WTV and Fox-affiliate WAWS, reported that the Florida Highway Patrol said “Fortunato’s license was expired when he hit and killed Esther Ohayon.”  Bryan also confirmed to iMediaEthics that indeed Fortunato’s drivers license “was expired at the time of the FHP case,” but that it’s “not to be confused with any type of suspension.”

In an Oct. 14 e-mail, Bryan updated us that “The investigation is still on-going. No charges have been filed at this time.”

Regarding First Coast News’ error, Bryan told iMediaEthics by email that First Coast News did what it could and issued “retractions and on air corrections for this oversight.”

“It was certainly done in a timely manner,” Bryan wrote.

Indeed it was. TV stations very rarely do on-air corrections so props to First Coast News.