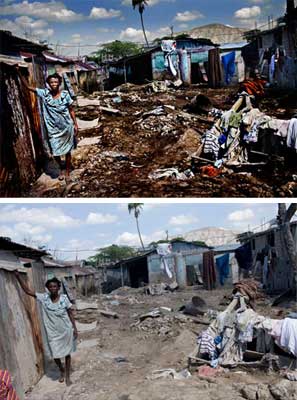 The image on the bottom was the original file before Photoshop was employed. The difference between the two images is astonishing.

A recent decision by a panel of judges to disqualify a Danish photojournalist from a photography contest due to excessive use of Photoshop raises questions about the ethical application of new technologies.

Klavs Bo Christensen’s pictures were removed from the Danish Union of Press Photographer’s “Picture of the Year” contest when judges compared his images to his RAW files and noticed he used exaggerated coloration in his submissions.

According to the rules published by the organization: “Photos submitted to Picture of the Year must be a truthful representation of whatever happened in front of the camera during exposure.  You may post-process the images electronically in accordance with good practice.  That is cropping, burning, dodging, converting to black and white as well as normal exposure and color correction which preserves the image’s original expression.”

The judges called Christensen’s color-saturated work “unacceptable.” (From imediaethics’s perspective that is an understatement. The departures from the original photos are stunning. See For yourself).

‘”It should not mean that we do not accept or recognize editing in Photoshop, but this example is really extreme,” said judge Miriam Dalsgaard.

Christensen disagreed:  “In my opinion, a RAW file … has nothing to do with reality and I do not think you can judge the finished images and the use of Photoshop by looking at the RAW file,” he told Jens Tønnesen, Web master for the Union of Press Photographers.

According to Editor-in-Chief David Schlesinger, Reuters’ strict guidelines for using Photoshop echo those of the contest as well as of most journalistic entities.  They state that while basic color correction is OK, dramatic color changes “mislead the viewer” and are not allowed.

Astrophotographer and author Jerry Lodriguss , who admits he has been criticized for using excessive digital imaging in his work, feels that the intent factors in on whether it is ethically acceptable to alter a photograph. Was the person intending to deceive?  Ladriguss also believes photographers tread a fine line between ethics and aesthetics when digitally manipulating photos:

“If you add something that wasn’t there in the original scene, you’ve crossed the line from a documentary art form into a fictional one. This may or may not be OK, depending on what your purpose is. If your purpose is to portray a scene as truthful, then it’s not OK. If your purpose was to create fiction, or ‘art ‘, then it is OK. You just have to be up front and tell the viewer what you are doing in either case.”