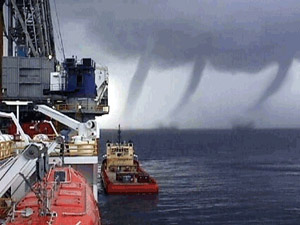 “It turns out that weather photos are often the victim of “photoshopping” — the term now popularly used to describe the manipulation of photos beyond mundane tweaks in color, contrast and the like, often for the purpose of deception. One example that has circulated widely across the Internet since 2002 is the above picture, which purports to be a triple waterspout descending from the rainbands of Hurricane Lili as it approached Louisiana in early October 1992.”