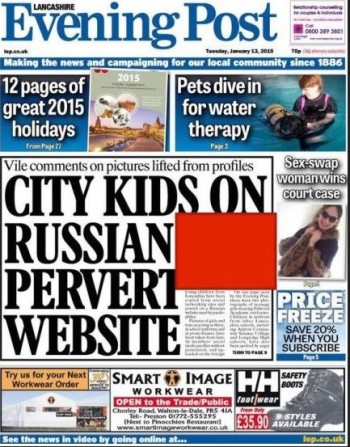 IPSO upheld a complaint against a story in the Lancashire Evening Post. (Credit: LEP, via Hold the Front Page)

The front-page story, “City Kids on Russian Pervert Website” was published Jan. 13.  Hold the Front Page posted a photo of the front page (above).

Even though the images were pixelated, a woman complained to the regulator IPSO because two of the photos showed her child and she and her friends could identify her child. The complainant had posted the original photos in question on her social media account, which is how the Russian website found them.

The newspaper argued it was OK to publish the photos because it was in the public interest. It claimed that its story prompted the children’s photos to be taken off the website in question and  that local parents thanked the paper for raising awareness.

IPSO agreed that it was in the public interest to report on the matter but IPSO said it wasn’t in the public interest to show the photos. The Evening Post’s article “led to the removal of the photographs of local children from the website, new child protection procedures at local schools, and the involvement of a local MP. The right of the newspaper to publish the story was not in doubt, and indeed it had performed a valuable public service by publicising the issue,” IPSO reported.

Further, IPSO decided the pixelation was “insufficient” and the newspaper should have realized the children could have been identified.

Because the mother posted her child’s photos on social media “in innocuous circumstances” and wasn’t aware of the Russian website’s republication, the Evening Post shouldn’t have published the pictures, IPSO said.

“The fact that the child had featured on the Russian website constituted significant and deeply personal new information, with the clear potential to cause significant trauma and disruption,” according to IPSO. “Notwithstanding the public interest in the story itself, there was no public interest which justified the publication of identifiable photographs of the child in this context.”