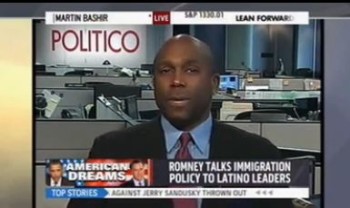 POLITICO’s Joe Williams was suspended June 22 for comments about Mitt Romney.  Williams’ POLITICO bio identifies him as the “White House Correspondent” and his LinkedIn page says he has been with POLITICO since 2010.

According to a note on POLITICO’s website, POLITICO will “review” Williams’ comments to MSNBC and on Twitter mocking Romney.  Specifically, “Williams made a remark suggesting Mitt Romney was only comfortable around white people,” which POLITICO said “fell short of our standads for fairness and judgment.”

See the video here on Mediaite.

The Washington Post reported that Williams issued a statement about the suspension saying in part that: “I understand and respect John Harris’ point of view– that I’ve compromised Politico’s objectivity, and my own…I’m not susprised a small group with internet access and an ambitious agenda can affect reporting and distort analysis of political news. It’s quite unfortunate and incredibly frustrating, however, that I landed in the crosshairs this time, calling Politico’s integrity into question and jeopardizing a job and a career that I love.”