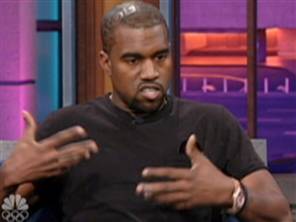 Last Sunday, ABC News reporter Terry Moran posted an off-the-record comment from President Obama on Twitter. Instead of sticking to serious issues like the wars in Iraq and Afghanistan or the economy, he tweeted: "Pres. Obama just called Kanye West a 'jackass' for his outburst at VMAs when Taylor Swift won. Now THAT'S presidential." ABC News quickly deleted the comment and apologized. The screen shot above shows West speaking about his VMA outburst on CNN's Larry King Live.

In an email response to imediaethics’s query about ABC’s off-the-record breach, the Poynter Institute’s vice president and senior scholar in reporting and writing Roy Peter Clark responded, “For the record, Mr. West is a jackass and I think truth is a good defense.” The Poynter Institute is a renowned journalism school that fosters integrity and ethics in its teaching programs.

So the journalism scholar is saying that because he and others believe that Kanye West is a jackass, it must be true?  When did name-calling become a core value of good ethics?

Last Sunday, ABC News reporter Terry Moran tweeted an off-the-record comment from President Obama.  In less than 140 characters, the co-anchor of Nightline took it upon himself to tweet the words of the president—”Pres. Obama just called Kanye West a ‘jackass’ for his outburst at VMAs when Taylor Swift won. Now THAT’S presidential.” Here is a screen capture.

The Poynter Institute’s defense of ABC’s bad behavior is surprising, especially since ABC News quickly said they were wrong, removed the tweet and publicly apologized as reported by Politico.

“It’s not really about what Moran did.  It’s about whether the president of United States is ever off the record,” says Kelly McBride, an ethics professor at Poynter in an article on The Pointer Institute’s website. “… it would have been inappropriate for CNBC to promise off-the-record status on behalf of the entire pool of journalists. So…it was appropriate for him to report it.”

That would depend on how one defines the word “report.”  Was Moran seriously using Twitter to “report” a story about Obama’s opinion of pop stars, or was he merely spreading a sensational piece of gossip to his million-plus followers in an attempt to scoop other journalists with a provocative presidential quote?

ABC News saw the error of their over-zealous reporter’s ways— they immediately deleted Moran’s tweet after discovering its transmission and offered apologies to the White House and CNBC.

According to Associated Press reports, multiple ABC employees—not just Moran–“overheard” the interview with the president who was speaking with CNBC’s John Harwood to discuss the Wall Street collapse of one-year-ago. AP writes: “The network said some of its employees had overheard a conversation between the president and CNBC’s John Harwood and didn’t realize it was considered off the record.”  “At least three network employees,” AP reports, “took to Twitter to spread the news.” Here is video on YouTube and the audio from TMZ of the pre-interview.

It’s still unclear whether ABC staff had full press privileges to cover the event, if they were part of a press pool, or if they listened in to a private interview given only to CNBC employees.  imediaethics has asked CNBC, ABC and the White House, but has not been given comments yet. We will update the story if we do.

Politicians, and many public figures, are indeed devoid of privacy from what they say, as a practical matter. However, this is no excuse for distracting the substance of a presidential interview  with an empty but sensational tidbit that will drive viewers but not serve the public good. McBride neglects to mention that the first duty of a reporter is the ethical obligation to disseminate vital information that serves the public in some positive way. America faces numerous serious issues, including health care, about which they need to hear from the president. ABC News’ tweet hijacked the full text of what Obama had to say.

From McBride’s response, it sounds like she forgot about issues of ethics and trust. Perhaps this professor forgot that the responsibilities of a major network political journalist is radically different from that of a gossip or an entertainment reporter.

Turns out Poynter Institute’s Roy Peter Clark’s response is even more baffling. imediaethics asked two questions by email: “Do you think it was appropriate for Terry Moran to Twitter Obama’s comment about Kanye West? I just read Kelly McBride’s take on this issue.  Do you agree that a president is never really ‘off-the-record?’ ”

Here is Clark’s answer via email:

“As a citizen, and as someone very interested in popular culture, I’m glad that Terry Moran shared with the world the president’s comment about Kanye West.  Politicians, especially those at the highest level, are responsible for everything they say, unless there is an explicit agreement that certain comments are not for publication.”

He continued: “There’s no harm here to the president. Most people think Mr. West is getting what he deserves, and Mr. President comes off as an ordinary guy.  And, for the record, Mr. West is a jackass, and I think truth is a good defense.”

Since the discussion about Wall Street excesses got completely sidelined by the sensational ‘jackass’ headline tweeted all over social media, wasn’t this an awful disservice to the president? Not only did the president’s ultimate message get overlooked, the public also missed out on the chance to hear deeper coverage on future issues surrounding the regulation of financial institutions.

McBride writes: “Watchdog reporters use ‘off-the-record’ as a tool to protect sources with critical information of significant public importance.” When our financial futures are at stake, the conventional off-the-record status of pre-interview small talk should have been honored to protect the public from such meaningless distractions.