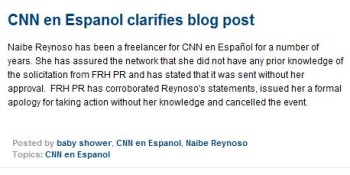 Gawker published what appeared to be an invitation to exchange gifts for a CNN Espanol reporter’s baby shower for coverage this week.

The Gawker blogpost, “CNN Correspondent Uses Her Baby Shower to Solicit Bribes,” published an e-mail from FRH PR, which says it is “doing all the PR” for the baby shower.  The e-mail reads in part:

The e-mail goes on:

“This will be a great opportunity to introduce your products to the mass media as she pitches many of her own stories to the networks and blogs about her favorite products.”

Further, the solicitation provides information about various levels of “sponsorships.”

But on May 5, CNN en Espanaol issued a statement through CNN Press Room that “clarifies” that Reynoso is “a freelancer.  (Fox News Latino published on May 4 an article by Reynoso and her author page on the site shows the site has published a couple of articles a month by her.)

CNN added that Reynoso said she had no “prior knowledge” and had given no “approval” of the “solicitation.”

CNN noted that “FRH PR has corroborated Reynoso’s statements, issued her a formal apology for taking action without her knowledge and cancelled the event.”  FRH PR identifies itself on its website as “a brand engagement agency” that “build careers and brands to the benefit and fortunes of our clients.”

We have written to FRH PR and messaged Reynoso through Facebook for comment and will update with any response.

UPDATE: 5/7/2012  12:15 PM EST: Reynoso responded to iMediaEthics request for comment with the link to the CNN Press Room blog that is referenced above.  She told us that FRH PR “apology email was sent to me (apologizing to me directly and to CNN)” and that she “forwarded it to my superiors.”