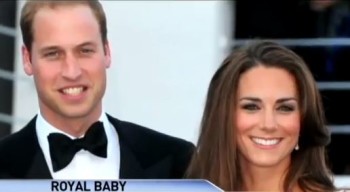 The UK Royal Family’s spokesperson accused Italian weekly magazine Chi of “a clear breach of the couple’s right to privacy” after it published photos of pregnant Kate Middleton in a bikini on vacation, the Guardian reported.  While Middleton has been much photographed since announcing her pregnancy, Chi‘s batch of photos reportedly picture Middleton “sunbathing in a bikini on a private holiday in the Caribbean,” which would allude to the privacy aspect.

UK media outlets are reporting on the photos and the Royal Family’s complaints about privacy, but iMediaEthics hasn’t seen the photos on the UK news sites yet.  The UK Sunday People, for one, said it “has chosen not to view the pictures and, like the rest of the British media, will not publish them.”  And, in its report on the photos, The Daily Mail avoided the photos as well.  While its story included a photo of Chi‘s cover, the Daily Mail used a black box to cover up the photo of Middleton.  The photo’s caption reads: “Offensive: This issue of Chi, with pictures of the Duchess blacked out, is due to hit newsstands tomorrow.”

British news outlets compared the new photographs of the pregnant Middleton to the coverage of Prince William’s mother Princess Diana.  As the Guardian reminded:

“The incident echoes the treatment of the prince’s mother, Princess Diana, when she was pregnant with William in 1982.  At the time she was on holiday on a Caribbean island when photographers from the Daily Star and the Sun snapped pictures of her in a bikini.”

Further, the UK Independent noted that Chi magazine was “one of the first European tabloids to publish pictures of Princess Diana as she lay dying following her fatal Paris car crash.” According to a 2009 CBS News/Associated Press story, Chi ran a “black-and-white photo” of Diana “receiving oxygen in the wreckage of the car crash that killed her on Aug. 31, 1997.”

Chi, which is owned by former Italian Prime Minister Silvio Berlusconi, is the same magazine that published photos of Middleton topless last fall. According to Chi parent company Mondadori‘s website, Chi has a weekly “average circulation” of about 218,000 copies. Middleton and Prince William sued French magazine Closer for invasion of privacy over the photos, which were taken of the couple on a “private holiday.”   Chi’s editor Alfonso Signorini defended running the photos as “deserving” of publication and “completely natural.” Further, Signorini indicated that the line he wouldn’t cross is a photo of her “having sex on the terrace.”  He added of the topless photo’s newsworthiness:

“This is the first time that the future queen of England has been seen topless. These photos are not scandalous, they are natural and they do nothing bad to damage her image, if anything they make her more likeable, more modern.”

In response, a Mondadori spokesperson sent iMediaEthics editor Signorini’s statement on the photos:

“’The article features photos of a young couple in love as they happily walk along the shore,’ explained Alfonso Signorini the editor of Chi.

“’They are images of such unexceptional normality that there is only limited mention of them on the cover of the magazine.’

“‘The photographs, which can in no way be considered scandalous, were bought from an international photo agency, do not harm the image of the protagonists and the reaction of the media seems to me wholly over the top,’ the magazine’s editor added.

“‘Moreover, the photographs can hardly be considered an invasion of privacy when the subjects are public figures in a public place, in the open air; specifically on a beach surrounded by other bathers.’

“‘It is also true that the Italian press is not a party to the gentlemen’s agreement between the British press and Buckingham Palace.’

“‘What our readers will see is simply a moment of joyful relaxation being enjoyed by a smiling, happy couple. Where’s the scandal in that?’ Signorini concluded.”

iMediaEthics has also sent an email seeking comment and asking about any legal action to the Prince of Wales’s website. We’ll update with any responses.