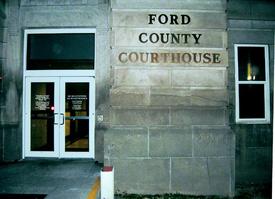 The Ford County Courthouse, where a Daily Globe reporter could soon be forced to testify regarding her notes and interviews for coverage of a murder.

Though it does not happen often, the courts can force reporters to reveal sources, if the information is pertinent to a criminal investigation. Reporters have been jailed for continuously refusing to reveal sources, held in contempt of the court. Others have broken down in the face of jail time, breaking a promise undoubtedly made to a source. For years, journalists have debated the necessity of shield laws, meant to shield them from being forced to reveal the identity of sources.They say such laws help them build credibility with sources. It speeds the news gathering process when sources believe their identity will be protected; it hinders said process when sources think their name will be revealed in court.

A Dodge City Daily Globe reporter will soon have to decide which side of the debate she falls on. As the Kansan.com reports, “ District Judge Daniel Love ruled this week that Dodge City Daily Globe reporter Claire O’Brien must testify at an inquisition about a story she wrote about murder suspect Samuel Bonilla.” The information in question was gathered during an Oct. 7 interview with Bonilla. An October 13 Globe story heavily based on the interview included statements from anonymous sources.

In the ruling, Love said the “ need for information” is greater than O’Brien’s “ privilege to protect her confidential sources.”

This comes after O’Brien and the Daily Globe fought a subpoena of her notes. The subpoena, issued by Ford County Attorney Terry Mallone “said [Mallone] needed O’Brien’s notes from her interview with Bonilla concerning Bonilla’s version of events leading up to the shooting. He also wanted O’Brien to identify a confidential source who provided information for the Oct. 13 article,” the Kansan.com reports.

At the time, Globe reporter Eric Swanson said, “The motion contends that Ford County Attorney Terry Malone, who issued the subpoena, is trying to convert O’Brien from an independent reporter into an investigative agent for the government.” He went on to quote Globe lawyer William Hurst, who said, “Under the federal constitution, as construed by the courts of this State, a subpoena that undermines the ability of the press to serve its important public functions without advancing a substantial law enforcement or judicial need should be quashed. That is precisely the case here.”

Darrel Adams, the publisher of the Daily Globe, plans to consult with the paper’s legal team before deciding whether to appeal Love’s ruling.

In a comment posted to the AP article on The Wichita Eagle web site, LonnythePlumber writes, “Readers won’t get the information if the press is forced to be arms of the government. The information should be obtained from other sources through investigation. Spending the money to appeal the decision may be the right thing to do.”

This is not the first time a reporter has been ordered to testify, thus revealing the identity of anonymous sources. In 2004, Washington Post reporter Walter Pincus continuously refused to reveal the identity of a source in the Valerie Plame case. In 2005, Pincus was found in contempt of court for refusing to reveal his source in an investigation of nuclear scientist Wen Ho Lee.

Time Magazine reporter Matthew Cooper refused to reveal a source, and “Cooper was held in contempt of court Aug. 6 and sentenced to jail for the duration of the investigation for refusing to reveal who his source was for a story on the leak of Plame’s identity to conservative columnist Robert Novak,” the Reporters Committee for Freedom of the Press reports. “The contempt citation was cleared after Cooper agreed to testify Aug. 23 about conversations with Vice President Dick Cheney’s chief of staff, Lewis ‘Scooter’ Libby. Libby had waived his confidentiality agreement with Cooper.”

Other journalists, including the late Tim Russert, were subpoenaed in the case, and testified only after being released from confidentiality agreements with Libby.

In September 2004, the phone records of two New York Times reporters were subpoenaed by a federal prosecutor in Illinois during an investigation into whether government employees leaked sensitive security information.

Here are several Poynter links regarding anonymous sources, as well as past legal cases regarding such sources.