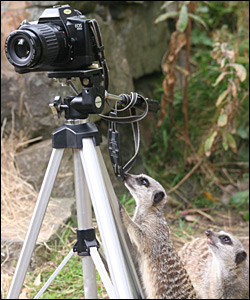 Chris Cheesman at Amateur Photographer reported “The BBC, The Guardian and The Daily Telegraph have today admitted that picture editors nationwide were duped into reporting that meerkats were capable of taking photographs.?”

“Oops! Loads of reporters (including us at Newsround) got caught up in a joke about a group of meerkats who had apparently taken photos of each other when someone left a camera in their enclosure,” the BBC reported in September 2007. “But it turns out it was a hoax and the man who sent the snaps out thought it was a good joke and that no-one would take him seriously.”