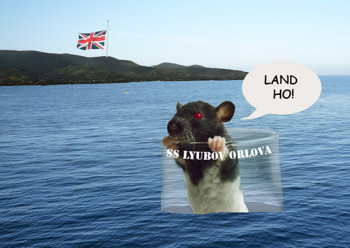 We have all heard of Snakes on A Plane (best worst movie ever) but the newest threat to Britain may be rats on a cruise ship, according to the latest viral hoax.

This ridiculous story began with an article in The Independent and has since been picked up (without any further investigation) by many other news outlets, such as Huffington Post‘s “Blame Canada? This Cannibal Rat-Infested Ship Could Be U.K.-Bound.”

The Independent’s Jan. 23 story claimed the Russian ship Lyubov Orlova, was filled with “cannibal rats” that were poised to stage an invasion by sea.

Rubbish you say? Surely not. It must be true because the Independent‘s unnamed “experts” back them up:

“A ghost ship carrying nothing but disease-ridden rats could be about to make land on Britain’s shore, experts have warned.”

And “salvage hunters say there is a strong chance it is heading” toward the United Kingdom. It is not made clear if the “salvage hunters” are the same as the aforementioned “experts” or if they are different anonymous sources.

It seems that twice, in March 2013, there were emergency signals picked up from the ship’s lifeboats and then a week later more evidence: “an unidentified object of about the right size was spotted on radar just off the coast of Scotland.” However, there was no source for those emergency signal claims either.

And has there been any sign of the ship in the almost year that has since passed? No. But according to the Independent the lack of evidence of the ship being out there is further evidence that the ship is still out there:

“Experts say the ship, which is likely to still contain hundreds of rats that have been eating each other to survive, must still be out there somewhere because not all of its lifeboat emergency beacons have been set off.”

Despite this story really being almost a year old, other media didn’t let that stop them from publishing headlines like NPR’s Rat-Infested Ghost Ship Might Be Heading For U.K. and The Irish Times’ Rat-infested Russian ghost ship drifts towards Irish coast.

At least NPR noted in its report that Salon was skeptical of the ghost ship claims. Salon reported on the story but warned “here’s a story that sounds made-up.” And HotAir, a self described as “one of the largest right-of-center blogs on the Internet” said it was ‘“likely a hoax.”

The BBC did not give into the temptation and published statements from both the UK Maritime and Coastguard Agency and the Irish Coast Guard who both confirmed the ship had not been sighted since last year and that neither group was taking any action.

Steven Morris and Aisha Gani for The Guardian also attempted to inject some reporting into their journalism:

“David Cameron’s official spokesman made it clear that it wasn’t top of the British government’s worry list. ‘That one hasn’t scuttled across my desk,’ was his pun-tastic reply when asked if Cameron had been briefed about the ship.  Pressed over whether the navy would intervene he said: ‘Gosh, we’re almost in a B-movie script development meeting here.’.”

Morris and Gani also endeavored to interview senior scientific officer Penny Hawkins from the RSPCA and reported that rats aren’t even likely to be cannibals. A Pre-enactment of the cannibal rats fleeing the ghost ship for the shores of Great Britain.  Photo Illustration by London Shearer Allen (Photo Credit: Matthieu Aubry. and Peter aka anemoneprojectors – camera busted! Via Flickr, Edal Anton Lefterov and Wollex via Wikipedia)

The Rat Tale Tide has Turned?

The Independent, which appears to have started this whole mess, is also (kind of) changing their tune. Its latest article on the subject begins:

“A ghost ship carrying a cargo of disease-ridden rats believed to be heading towards British shores may have sunk, experts now believe.”

Of course the phrase “now believe” implies that the experts have recently changed their minds. Writer Heather Saul tries to shore up the previous article as well as pass the blame on to the still anonymous source;

“…Salvage hunters hoping to trace the 4,250-ton vessel said they believed there was a strong chance it is heading this way.”

That is a far cry from the first article’s lede:

“A ghost ship carrying nothing but disease-ridden rats could be about to make land on Britain’s shore, experts have warned.”

I think everyone is appropriately terrified at this point, but less by the rats and more so by the state of modern-day journalism.

While writing this article, the Grateful Dead song Ships of Fools has been popping into my mind. But I don’t think it’s apt. This time the fools appear to have been on land.