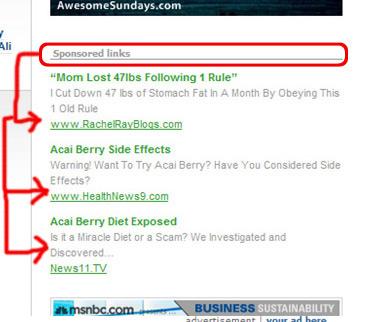 This screen shot was taken from the MSNBC web site. Note the "Sponsored links" are all deceptive ads. Two are fake news sites that advertise berry health pills and the third is a fake Rachael Ray blog.

iMediaEthics (then called StinkyJournalism.org) was told by Rachael Ray’s production office that Ray “has nothing to do with” the fake blog endorsements of berry diet products and that  her “lawyers are pursuing” it.

“Are you aware that MSNBC is trafficking these fake ads?” iMediaEthics asked. “We are well aware of it,” the producer answered. Again, she said,”The lawyers are pursuing it. You need to contact them for further comment.”

As covered in previous reports, iMediaEthics has been investigating the overwhelming amount of deceptive Internet advertising now being trafficked by news outlets. Much of the public is unaware that the Federal Trade Commission (FTC) instructs the media–who sells and profits from advertising– how to screen out deceptive ads and requires them to do so. News outlets, such as MSNBC, have people on staff whose job it is to keep deceptive ads–those that are in violation of FTC rules and their own policies, which presumedly include not victimizing citizens–off of their web pages and airways. So how and why is MSNBC running these deceptive ads?

I informed MSNBC’s press representative, Gina Stikes, about Rachael Ray’s producers’ denial of any berry product endorsements and the fact she was pursuing legal recourse and asked for her comment. (None received yet).

In recent weeks, I have been in communication with MSNBC and Stikes. We started our reports about MSNBC news-feed ads deceptively appearing on my iGoogle page after clicking on what were supposed to be MSNBC news headlines, not ads. Despite  MSNBC denials of specific wrongdoing (“Thanks for your email.  The team continues to work on the issue until it is resolved”), Google informed me of their finding of a “policy violation”–more on this tomorrow.

Although some MSNBC iGoogle news-feed ads, like the one for New York’s U.S. Senate appointee Kirsten Gillibrand’s campaign, were real ads (we asked them), most of the MSNBC links lead right to fake blogs and fake news sites. Our readers have written in to thank us for exposing “fake news” advertising fraud as they were nearly fooled. Read several comments here.

Read the URL for one fake blog –http://www.rachelrayblogs.com/?p=3&t202id=344&t202kw={sitespecificmsnbcnews}. The URL in addition to the site itself, brazenly swipes Rachael Ray’s name and thus pretends to be authentic. But look at the end of the web address. This fake blog, replete with a misspelling of Ray’s name, appears one click away from MSNBC News home pages, and to reinforce the deception, the URL says “sitespecificmsnbcnews“.

One of the first duties of journalists is to protect the public. In this case, MSNBC needs to just switch off Google “Sponsored links” if they can not turn off the FTC and Oprah and Rachael Ray copyright-violating ads. Why haven’t they already done this when many of these ads are unambiguously fraudulent? While the fraudster companies trick the public, they also pay big advertising fees to news outlets. There are big bucks generated from all the clicks made from MSNBC news pages by their trusting readers.

This is a Google problem, too, but journalism outlets have a sacred duty to put the interests of the public, who they are representing, in front of profits. MSNBC and all the others with unclean hands need to turn these deceptive ads off now!

The media, including MSNBC, needs to be investigating these fraudsters and exposing them–not profiting from them at the public’s expense.