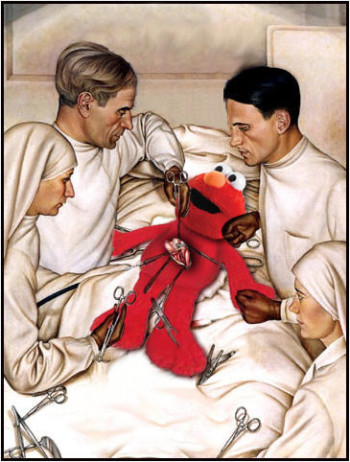 "If we cannot trust a developing Asian nation to effectively regulate the manufacturing of Elmo toys, can we trust one to regulate the medical industry?"

Did you know that for 200 easy payments of $39.95 you can get a hip transplant? And if you act now, maybe your health insurance company will pay your way to, of all places, sunny, tropical Thailand for the procedure.

At least that’s what I heard on a recent WNYC public radio news segment.

Recently WNYC, New York City’s local NPR and PRI member station ran an episode on the quickly growing “medical tourism” industry.  In 2005, according to the National Coalition on Health Care, approximately 500,000 Americans travelled out of the country for medical and dental procedures, often part of a luxury vacation package.  “Medical tourism” has spawned its own travel and insurance agencies and is a worldwide multi-billion dollar industry.  Many insurance and Fortune 500 companies are looking into the possibility of outsourcing expensive medical procedures to save up to 85% on medical costs.

These medical tourism heavy-hitters, predictably, had only positive opinions on medical tourism and as the sole guests, no dissenting opinions were offered. There was no such discussion in the hospitals segment because no one in the interview provided the patient’s point of view.  There was no doctor to discuss potential pitfalls of having your medical doctor so far away from home.  There was no medical ethicist to discuss the impact of these hospitals on local communities. There was no lawyer to discuss the lack of legal protection patients have when seeking treatment outside of the US. And, finally, there was no representative from the American Medical Association, which published a report on its concerns about medical tourism in June.
What Elmo can tell us about medical regulation . . .

Apparently, WNYC’s producers were also immune to the irony that this story aired shortly after a segment called “Dangerous Playthings” on the recent recalls of Mattel products made in China.  I have a question that apparently did not occur to the producers of the Brian Lehrer Show.  If we cannot trust a developing Asian nation to effectively regulate the manufacturing of  Elmo toys, can we trust them to regulate the medical industry?

The problems of China – corruption and lack of oversight by the government – are shared by its emerging neighbor to the south. Indeed, there is a dangerous mix of politics and medicine in Thailand.  In an online article a US citizen working in Bangkok, describes how Thailand’s official political position that there is no malaria in Bangkok, affected his treatment and jeopardized his health.  After falling ill, he visited three Thai hospitals including, Bumrungrad. They all refused to test him for malaria, based on the government’s official position. The doctors told him that because he had not been outside of Bangkok and because there was no malaria in Bangkok it could not be malaria and therefore they would not test him.  When he went to yet another hospital he lied about having travelled outside of Bangkok and they agreed to test him.  The test came back positive for malaria and he was eventually treated and recovered.

A closer look shows that the segment’s only balance came in the form of pointed, skeptical questions from callers. But the guests were allowed to answer them in ways that further promoted their company’s products.   For instance, one question about a patient’s legal protection against malpractice was answered without fully disclosing the fact that there is little to no legal protection for patients in Thailand, which was discussed in the AMA report. Patients are “likely to encounter serious difficulties in seeking legal remedies for bad healthcare outcomes incurred overseas,” the AMA report stated.  According to the Tilleke & Gibbins website, the self-proclaimed oldest and among the largest independent law firms in Thailand, “malpractice claims in Thailand are very rare. Unlike the adversarial system of law in the West, Thailand’s legal system is inclined to be conciliatory.” The website goes on to explain that compensation in lawsuits is restricted to actual damages and that Thai law does not allow for compensation for pain and suffering.  So if you are severely injured by medical malpractice and win in court your judgment will be limited to lost wages and the cost of the procedure.  In comparing judgments awarded in the USA to those in Thailand, the awards in Thailand are described as “very low.”

Rupak from Planethospital opportunistically used the question on malpractice as an opportunity to plug the company’s supplemental insurance.  “In under six weeks,” said Rupak, “we are introducing an optional insurance policy . . .We are able to offer you a malpractice policy for $200 – $300 over your surgery.”
Varying standards and fuzzy numbers

You don’t have to look far to find the controversy surrounding the practice of medical tourism.  The US Joint Commission, who are responsible for accrediting US hospitals for Medicare has a new international division that Curtis touts as accrediting his hospital and thereby proving it is equal to any US hospital’s standards.  In its recent report, American Medical Association questioned the way foreign hospitals are evaluated by the JCI, citing “significant differences between the Joint Commission’s domestic and international standards.”  And in a 2005 article, Washington Post reporter, Gilbert Gaul, accused the Joint Commission of a serious conflict of interest for running a costly training program for hospitals that assist them in passing JC reviews. Gaul asserts that upwards of 99% of hospitals facing review receive accreditation and that the Joint Commission “has missed glaring examples of poor care in which patients have been injured or killed.”

Bumrungrad International has also had its share of problems.  One well publicized case of medical malpractice was of a 23-year-old American man who died after being improperly treated for a snake bite.  It is reported on Planethospital’s website that he was “simultaneously administered … six contraindicated and lethal medications.”  Unfortunately, people die from medical malpractice all the time and it is by no means an uncommon occurrence in the US.  However Bumrungrad is accused of serious attempts to cover-up its mistakes and is under investigation by local authorities for these matters.

It is also risky for patients to trust data provided by Bumrungrad. Currently, Bumrungrad does not publish its procedure outcomes, as US hospitals are required to do.  And even if the hospital did publish these figures, independent research suggests they’d be highly suspect. Tom Keesling publisher of the Medical Tourism Review has done an exhaustive analysis of Bumrungrad’s published patient numbers and shows convincingly that they can’t be accurate.  Based on the number of patient beds and surgical suites, Keesling concludes that Bumrungrad is exaggerating their numbers of treated patients by many times over.

Not all public radio coverage of the medical tourism issue has been so one-sided. In November 2006, KQED, a public radio station in Northern California, aired a piece on medical tourism on its show Health Dialogues.  They managed to produce a segment that featured many different points of view including warnings from Anmol S. Mahal, the president of the California Medical Association and Robert Wachter, chief of the Medical Services at the UCSF Medical Center. The panel also included several noted physicians and, yes, Bumrungrad president Curtis Schroeder.  The overall message: in this emerging, largely unregulated field – “patient beware.”

There is a fine line between editorial journalism and advertising – and that line is not always defined by a direct payment. This story was allowed to cross into the area of advertising, a problem compounded by a topic as sensitive and pressing as healthcare.  Public Radio’s reputation is such that listeners will often cite NPR’s imprimatur as lending it credibility. On one medical tourism message board a person posted “public radio is dependable [and gives] its listeners correct information”.  Because Public Radio has worked to build its reputation of working in the public interest, they are all the more responsible for following journalistic guidelines and providing fair and balanced reporting.

Lives may well hang in the balance.