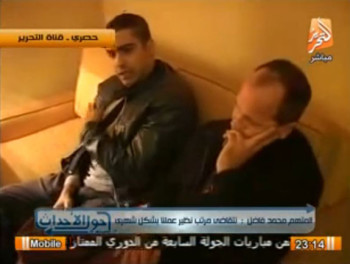 On Day of Arrest, AJ Journalist Tells Police the Network Doesn’t Film Protests in Egypt, Insists It Does Have Press Passes

OFFICER, UNIDENTIFIED: I’ll tell you, why are you in a hurry? Are you afraid of something?

OFFICER: Did we do anything to you?

OFFICER: Did anyone verbally insult you?

FAHMY: No. There isn’t anything—

OFFICER: We just want to make sure, did anyone ask you for anything?

OFFICER: Are you certain about what happened here?

MOHAMED FAHMY, JAILED AL JAZEERA ENGLISH BUREAU CHIEF:  None of the pieces of equipment that are mentioned here are owned by me, not even a slight part of them are mine at all. Not at all. None of these things are mine in any way.

POLICE OFFICER, UNIDENTIFIED: I heard. That is very strange.