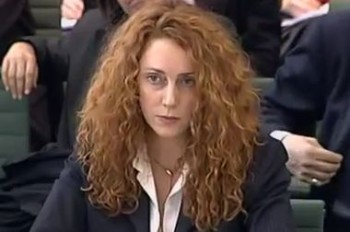 Six people, including former News International CEO Rebekah Brooks and her husband Charlie Brooks, were arrested March 13 for questioning related to “suspicion of conspiracy to pervert the course of justice,” the Associated Press reported.

Rebekah Brooks resigned as News International CEO in mid-July 2011.  She was News of the World’s editor from 2000 to 2003 and the Sun’s editor from 2003 to 2009.  Days after her resignation as CEO, she was arrested for questioning by the police.  She was recently in the news when the Guardian reported in late February that the UK police “loaned” her a “police horse” in 2008.

According to the BBC, Brooks’ husband “is a good friend of David Cameron, whom he has known for more than 30 years.”  The New York Times noted “It is unclear how Mr. Brooks, an old Etonian with impeccable establishment credentials, fits in to the operation. But The Guardian reported in July that he was involved in an odd episode featuring a mysterious laptop left in a bag in a garbage can in an underground parking garage near the apartment he shares with his wife in London.”

The UK police “refused to confirm the names of those arrested” and only provided identifying information like ages and genders of the arrested, according to the Guardian.  However, later in the day, CNN reported that “police confirmed” Brooks was arrested by telling CNN that the woman arrested “had previously been arrested July 17.”  According to CNN, Brooks “was the only one arrested in connection with phone hacking that day.”

The UK police published this statement in which it noted the arrests were made “by officers from Operation Weeting,” the UK investigation into phone hacking.

The Daily Beast reported that Media Standards Trust director Martin Moore suggested the arrests might be related to News International’s “e-mail deletion policy.”  Moore, who also founded the Hacked Off Campaign, which identifies itself as a “campaign for a good public inquiry into phone hacking,” explained to the Daily Beast:

“A few weeks ago we learnt that senior executives at News International deleted hundreds of thousands of emails in a deliberate policy to undermine legal action by victims of hacking. This was conspiracy to pervert the course of justice on a pretty grand scale. It would not be surprising if today’s arrests were connected to that deletion.”

Sky News reported that News International’s “head of security” Mark Hanna has been identified as one of the arrested men.

According to the BBC, the March 13 arrests make the “total number of people arrested” in the police investigation of the press 44. Sky News noted the phone hacking investigation Operation Weeting specifically has arrested 22 people. (However, The Guardian reported that 23 people were arrested.)

The UK police said its arrests weren’t because of ” information passed to them by News Corporation’s management and standards committee (MSC),” The Guardian reported.  We have written previously about the committee, identified as an “internal investigations unit” of the company, which has provided information leading to at least 11 News Corp. journalist arrests.

The Guardian noted that last week, Brooks’ lawyer Stephen Parkinson questioned if she could ever get a “fair trial.”  He wrote for the Daily Telegraph that the hearings into the UK press have allowed “much prejudicial material…into the public domain.”

He cited the testimony of former News of the World features editor Paul McMullan, who called Brooks “criminal -in-chief” during last year’s Leveson Inquiry and noted that Brooks couldn’t “challenge the evidence” McMullan provided.  He also noted that UK police official Sue Akers at the Leveson Inquiry Feb. 27 said there was a “culture of illegal payments” at the Sun.

Akers’ comments prompted a complaint to the UK Attorney General, Dominic Grieve, that her comments “could prejudice any future trials.”

Comment about white people at Brexit protest not problematic, OfCom rules
Corrections: The Roomba didn't do it! Irish Libel Law, Irish or British, How many Troops Abroad?