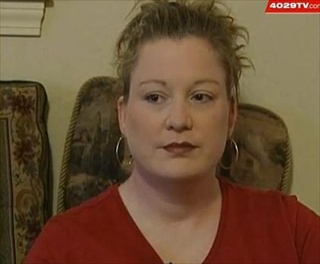 Renee Gork, seen in this detail of a screenshot from an interview with Arkansas TV station 4029, was fired from Arkansas radio station KAKS just two days after she wore a Florida Gators hat to a conference held by rival Arkansas Razorbacks football coach (Credit: YouTube, 4029)

Is it OK to wear sports fan gear if you’re a sports reporter?

Arkansas radio reporter Renee Gork wore a Univ. of Florida Gators hat to an Aug. 14 press conference held by the Univ. of Arkansas Razorback’s football coach Bobby Petrino.  After Petrino answered a question posed by Gork, he ended his response saying “And that will be the last question I answer with that hat on,” Petrino said.

(The Gators beat the Razorbacks last year in their football matchup.)

Just two days later, Gork announced via Twitter that she had been fired.

Sports Illustrated noted that KAKS is “a northwest Arkansas radio station that calls itself Hog Sports Radio.”  According to Sports Illustrated, Gork has said she’s sent letters apologizing both to the Univ. of Arkansas and Petrino, and that she tweeted she wanted to “publicly apologize to coach Petrino and UA fans on the show today,” but wouldn’t be able to since she was fired. Gork said in an interview on talk radio program “The TJ Carpenter Show” that she was hired specifically to cover the Razorbacks.

According to Sports Illustrated, Gork, who graduated from the Univ. of Florida, didn’t wear the hat intentionally. Rather, she said “she grabbed the hat without thinking Saturday because it was raining outside.”

Gork said in an interview with the TJ Carpenter Show that wearing that hat “wasn’t a stunt I was trying to pull, and I wasn’t trying to get any attention. It was just a dumb mistake.”  The TJ Carpenter Show is a sports radio talk show on ESPN 92.1.  Gork furthered that she didn’t think Petrino was being seriously critical of her wearing the hat, but rather pointing it out.

Gork said she was fired because she wouldn’t be able to cover the team’s practices.

Whole Hog Sports reported that Gork’s boss says the hat wasn’t the only reason she was fired.  KAKS general manager Dan Storrs told the Associated Press Aug 17 that the station openly supports the Univ. of Arkansas.

“This radio station is Hog Sports Radio.  We are very biased. We support the Razorbacks 100 percent.”

The South Florida Sun-Sentinel reported that Storrs vaguely attributed her firing to her use of public social media, while praising her work.  Storrs denied that the hat had anything to do with her firing.

“There were some other things she made public via tweeting and Facebook that went against some of the things that she had to do with this radio station,”The South Florida Sun-Sentinel reported  Storrs said. “She’s phenomenal, she really is. I hired her because of her resume. She is very good at her job. Unfortunately, she couldn’t continue to do her job here.”

Storrs also said that Petrino and the University of Arkansas didn’t “have anything to do” with her firing.

The Palm Beach Post reported the University of Arkansas’ statement, which denied any responsibility for Gork’s firing, but did say that the school’s athletic department advised Gork not to attend Monday’s practice.

“The University of Arkansas has no connection to The Hog Sports Radio and has no direct or indirect control over the station’s management or personnel decisions. University of Arkansas athletic department personnel did communicate to the reporter that her attendance at Monday’s practice was not recommended to allow additional time to pass. The University wishes to be very clear that it did not request any employment action with regard to the reporter.”

WholeHogSports wrote Aug 18  that Petrino said in an Aug 18 press conference that he didn’t expect the resulting media attention on Gork’s wearing of the hat.

“I don’t know much about the intention from the national media,” Petrino said. “When the incident happened here, there was never an intention to see it escalate the way that it did. But that kind of got out of our control.”

The Society of Professional Journalists’ code of ethics advises journalists “remain free of associations and activities that may compromise integrity or damage credibility.”

In an interview with Fayetteville, Arkansas TV station 4029 posted on YouTube, Gork agrees that she shouldn’t have worn the hat, but that it was “a big mistake.”