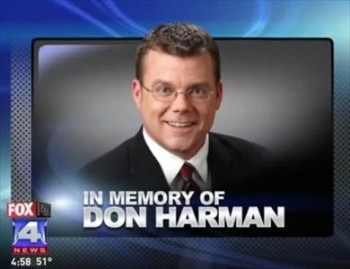 We’ve written numerous times on guidelines for reporting on suicides and murders.  But, how do you report when the victim worked in the same newsroom?

The Radio Television Digital News Association (RTDNA)’s Region 4 and 5 director, Peggy Phillip, addressed this real scenario in a Dec. 2  column for the RTDNA website. Phillip is also the news director at Kansas City NBC-affiliate KSHB, which wasn’t originally disclosed on the RTDNA post. We wrote to RTDNA to ask that they add a note about Phillip’s relationship to this story as news director of a rival station, as it’s unclear from the story.  On our first read, we thought she was telling the story as an RTDNA region director whose advice was solicited by WDAF on how to handle the story or even as a member of the station in question.  RTDNA’s Ryan Murphy quickly responded to our inquiry and added Phillip’s position at KSHB to her byline.

As Phillip explained, WDAF’s assignment manager contacted her Nov. 29 because Harman “was found dead in his home” and “police were investigating.” She agreed to have her station wait to report on Harman until his “next of kin was notified.”  However, Phillip wrote that the longer they had to wait to report the news, the more “uncomfortable” the situation became.

Quickly, “queries about Harman began to surface” on social media sites, according to Phillip, but there were no official reports from a news outlet on Harman.  “Certainly the management at WDAF was in the most difficult position, balancing the public’s right to know with their own significant loss,” she wrote about WDAF’s waiting to report.

The Kansas City Star’s Aaron Barnhart reported on WDAF’s decision to wait to report.  According to Barnhart, WDAF waited eighteen hours “because it wanted to reach Harman’s 79-year-old father, Gordon, in Ohio. But he was traveling, and in the 18 hours that it took to locate him, word leaked out of the station and onto social networks and blogs.”

According to Barnhart, WDAF did announce in a Nov. 30 on-air statement at noon that he had died, but prior to that only let viewers know that the station understands that they have “questions” and “concerns.”

According to Phillip, her station, KSHB, waited to report on Harman until Nov. 30’s 4:30 PM and 5 PM news programs.  According to Media Bistro’s TV Spy, “Although all three WDAF rival stations reported the story, only KSHB’s coverage went into detail, detailing Harman’s struggle with depression for viewers.”

Barnhart reported that media ethicist Bob Steele told the Kansas City Star that while he can understand why WDAF waited to report, “At some point, however, it’s very difficult to hold back on the story about this person who is very much a public figure.”  He added that “It can be challenging finding that balance between reporting the truth, which is a journalistic obligation, and minimizing harm, which is a professional obligation.”

The Kansas City Star’s readers representative Derek Donovan also weighed in on the issue in a Dec. 1 column.  Donovan wrote that “more than one reader” has criticized the Kansas City Star for revealing that Harman committed suicide, which he noted is “opposite from what I normally hear about how journalists cover suicides.” According to Donovan, readers often question why the Star doesn’t report on suicides, but perhaps in this case, readers “considered Harman more than just a public figure.”

According to Donovan, the Star ordinarily “doesn’t cover suicides by private citizens” unless it becomes a news event because of the place or situation of the suicide.  “I strongly agree with the policy of not writing about private figures’ taking their own lives, at least in the context of spot news — a straight report of the facts,” he wrote.

But, he noted that if the family is OK with newspaper reporting on the suicide aspect of the death, “it’s perfectly appropriate for journalists to tell those stories.”  He wrote:

“Suicide has touched the lives of a vast number of people, though, and I think many readers want to discuss it to better understand what causes it and how it can be avoided. But I also respect those who think this was a case where the topic shouldn’t have been broached.”

We wrote in October when Toronto Star public editor Kathy English questioned media standards of reporting on suicides, in light of hockey player Rick Rypien’s August death.  According to English’s public editor column, the Toronto Star recommends not including that someone died from suicide “unless there is some overriding public interest in doing so.” However, English highlighted the possibility that reporting on suicides could “spark important public discussion,” if the reporting is careful.

Likewise, as we have written, New Zealand group CASPER, which represents the families of suicide victims, has advocated for journalists to not ignore suicide reporting.  Instead, the group recommends changes to New Zealand’s guidelines for reporting on suicides so that the public can learn about suicide prevention and “the impact” of suicides.  See our report here on why CASPER wants revisions to New Zealand’s guidelines for media reporting on suicides.

We also wrote in September 2010 about journalism ethicist Edward Wasserman’s tips for reporting on suicides. Mirroring the comments of Kansas City Star readers’ editor Derek Donovan, Wasserman noted in his August 2010 blog post that usually the media only reports on suicides if they “take place in public, involve public figures — or exemplify some larger social problem.”

We’ve written to WDAF to see if the station has any comment about the reporting in this incident. We’ll update with any response.